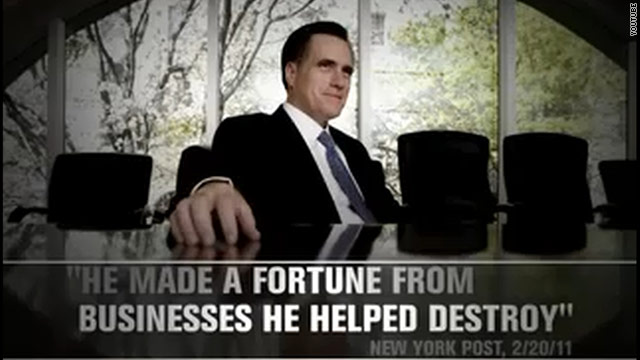 "Let Detroit go bankrupt," Romney says in the Priorities USA television advertisement, repeating the headline of an op-ed he wrote in 2008, arguing for a managed bankruptcy process rather than a bailout for the industry.

A baritone narrator criticizes Romney around the quote, saying "There's little question he made a fortune from businesses he helped destroy," and later asking, "Are those the values we want in an American president?"

The brief clip of Romney is from a 2011 interview on CBS, as Romney explained his argument in the op-ed. In the interview, he said that "those companies needed to go through bankruptcy to shed those costs."

The 30-second spot will air in the Detroit and Flint area Wednesday through Feb. 28, the day of the Michigan primary, according to Priorities USA.

In response, the Romney campaign criticized the president, arguing he has "failed Michigan."

"The last thing President Obama wants to do is run against Mitt Romney – and that is why his political machine continues their deceptive attacks to 'kill Romney' and is desperately trying to tip the scale in the Republican primary. President Obama has failed Michigan," campaign spokeswoman Amanda Henneberg said. "On his watch, thousands of Michiganders have lost their jobs, homes and businesses. No other candidate cares for Michigan or the automotive industry like Mitt Romney does, and he is heartbroken to see what has happened to his native state.

"The only way for Michigan to realize its tremendous economic potential is to defeat President Obama, and Mitt Romney is the only candidate that can do that," she said.

With the Michigan vote less than a week away, voters in the Wolverine State will see ads from the competing campaigns lighting their airwaves. Romney's campaign has purchased nearly $1.2 million in ad time, a media buying source told CNN last week, and Santorum had made small buys for three separate ads.

The super PAC supporting him, the Red, White, and Blue Fund, announced on Tuesday a $600,000 buy – which, combined with a previous $663,500 purchase in the state, would match Romney's ad spend. The super PAC supporting Romney, Restore Our Future, has purchased $1.5 million in Michigan, Arizona, and several Super Tuesday states.

Surveys of Michigan voters, including a CNN/Time/ORC International poll released Tuesday, show a dead heat between Romney and Santorum in the state where Romney was born.