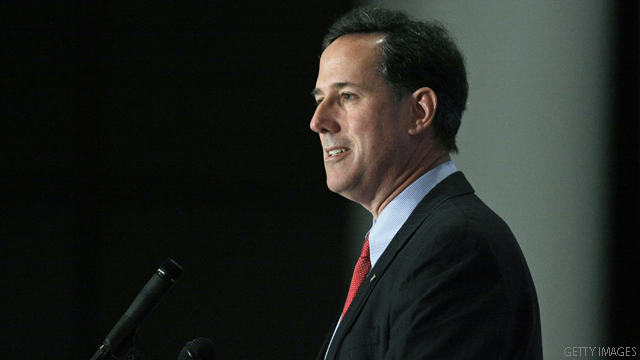 As Santorum harshly criticized the president on the economy and foreign policy during the speech in Tucson, audience members could be heard calling the president a "liar," "arrogant" – and repeatedly booing his name.

The candidate did not use those words himself. Instead, his words encouraged his audience.

For example, at one point, Santorum accused the president of appeasing "evil" around the world.

"Ronald Reagan was courageous enough to go out and speak about the forces of evil," the former Pennsylvania senator said.

He continued: "Our president refuses to call evil – evil. He refuses to even name it, refuses to confront it. He tries to appease and cajole it in an effort to reduce America's commitments around the world - that if we just have paper or if we just try to make nice with those who are actively doing harm to America and its allies, that somehow or another that threat will go away or be ameliorated."

"And what we have found is that is simply, from history, it doesn't work."

On Tuesday, the former Pennsylvania said, "I believe in good and evil" in response to CNN questions about his 2008 comments that Satan had set his sights on the United States.

The previous comments raised eyebrows. Yet Santorum defended his words.

At another point during the Tucson speech, Santorum accused the president of trying to end core U.S. beliefs.

Such language directly appeals to Christian evangelicals and the conservative tea party movement – two groups Santorum is courting in the GOP race. Speaking just under an hour, the candidate promoted tea party ideals: adherence to the Constitution, lower taxes and less entitlement spending.

The candidate also addressed an issue of major concern to Arizona, one of four states that border Mexico.

"You have my pledge that we will secure this border," Santorum said. "We will deal with the issue of the drug violence and the cartels."

He also pledged, if elected president, to "deal with the national security threats to our country at the border and secure the border so that the people in Arizona can live in peace and prosperity just like every other state in the country."

The afternoon event was Santorum's only public appearance of the day ahead of the CNN/Arizona Republican Party Debate Wednesday evening. CNN's John King will host that debate – the last before Super Tuesday.

Meanwhile, Santorum appears to be increasingly wielding a double-edged sword: training as much fire against the president as he does against Romney.

On the same day the former Massachusetts governor played up his tax plan to revive the economy, Santorum mocked his rival.

"I just saw today that Governor Romney announced that he was going to be lowering the tax rates to – well, the tax rate I proposed," Santorum said.

"Welcome to the party, Governor. It's great to have you along."

And Santorum continued to draw contrasts between himself and his main rival.

"Look at the record versus the rhetoric of what you see of in many cases 'Johnny Come Latelys' to the conservative cause," the candidate said. "That's the decision you have to make here in Arizona. Who do you trust? Who is authentic? Who is believable?"

Romney's campaign responded with a statement linking Santorum to Obama.

Some national polls suggest that Santorum's double-edged slams may be helping him in the GOP race. However, in a new NBC News/Marist poll out Wednesday for Arizona, Romney holds a 16-point lead over Santorum.

Arizona and Michigan hold primaries February 28. Twenty-nine winner-take-all delegates are at stake in the Arizona contest. In Michigan, the 30 delegates at stake will be divided proportionally among the candidates.

Santorum appealed to the audience about the importance of both contests.

"You are going to have a huge impact," he said. "Everybody is focused in on Super Tuesday."

"But more than anything else, what happens in Michigan and Arizona next week is going to have the biggest impact on Super Tuesday and this election than any two states."