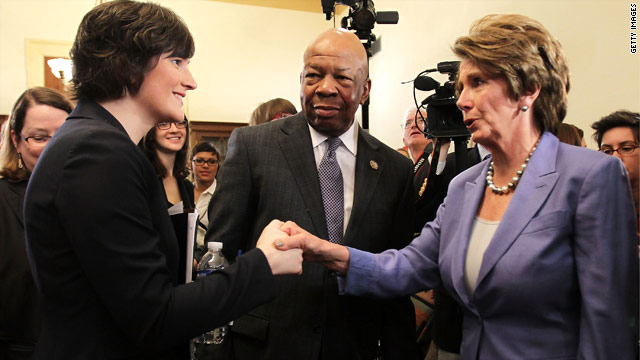 Pelosi aims to draw contrast with GOP on contraception policy

Washington (CNN) – Aiming to draw a sharp contrast with a Republican-organized hearing a week ago that included an all-male panel of witnesses, House Democratic leader Nancy Pelosi convened her Policy Committee Thursday to talk about the president's new contraception rule and featured a single witness – the woman the GOP wouldn't allow to testify.

Pelosi mocked House Oversight Committee Chairman Darrell Issa's explanation for rejecting the Democrats' chosen witness for last week's hearing - Sandra Fluke, a law student. He argued she wasn't qualified to appear on the panel because the subject was meant to be about religious freedom, not birth control or health care policy.

Congress is in recess this week, but Pelosi scheduled a partisan meeting of just Democrats to give Fluke the chance to argue that women should have access to contraceptives, even if they work for religiously-affiliated organizations. In a cramped hearing room Pelosi and three other Democrats who are also on the Oversight committee piled on Issa and accused him of ignoring female voices on the topic a week ago.

Pelosi said that after last week's hearing she has heard from over 300,000 people who have demanded that women's views be heard.

New York Democratic Rep. Carolyn Maloney sat next to a giant poster of a picture of the all male panel at the Oversight hearing, and ridiculed the visual message.

"100% of those who give birth and plan their families are women. But 100% of those on that first panel talking about the access to family planning, the ability to plan and space your children, and basic preventive health care, there was not one single woman on that panel, what is wrong with this picture?" Maloney asked.

Issa and his committee staff declined to comment on Pelosi's event.

Fluke suggested her story was not what the GOP-led committee wanted to hear. "What I have learned from this experience is that they say knowledge is power and evidently the knowledge of how this regulation will benefit millions of women's lives is very powerful and unfortunately evidently it's very threatening."

The third year law student gave details about fellow Georgetown University classmates who, Fluke said, had suffered medical complications because of the Catholic school's policy of not providing access to contraception. One friend of Fluke's told her she needed to take birth control pills to treat ovarian cysts, but when she couldn't get the pills, a medical complication led to surgery to remove her ovary.

Fluke also said another woman had told her that the school's policy on contraception made her avoid seeking care after she was raped because she believed treatment related to reproductive issues would not be covered by her health care plan.

Rep. Elijah Cummings, D-Maryland, the top Democrat on the Oversight Committee, who had pushed for Fluke's participation in last week's hearing, said his male colleagues wouldn't have put up with the situation if the tables were turned.

"I asked the question, 'If this were a hearing on prostate cancer, and there was a lineup of women and no men,' I guarantee you men would not have stuck around because they would have said to themselves, 'you know, come on give me a break,'" Cummings said.

Washington. DC Delegate Eleanor Holmes Norton remarked that the third year law student right out of "central casting" and represented the views of women across the country who believed access to birth control was a health care issue.

But Rep. Jeff Fortenberry, R-Nebraska, who is the lead sponsor of House legislation to repeal the Obama Administration's recent regulation, told CNN from his Lincoln, Nebraska office that this debate was not about birth control, but about basic constitutional rights.

Fortenberry's bill would overturn the president's policy requiring insurers to provide contraceptive coverage, even to those who work for religiously-affiliated groups.

"The Respect for Rights of Conscious Act, which the original hearing was held upon, does not restrict access to any legal drug or procedure in America," Fortenberry told CNN. "It simply addresses the issue of the rights of conscious for all Americans' religious liberties."

In closing Thursday's session, Pelosi thanked Issa for giving her an opening to spotlight the issue. Many Democrats believe the debate will help energize female voters in an election year.

"We almost ought to thank the chairman for the, shall we say, lack of judgment that he had to arouse, to raise the awareness, because it's been very hard over the years to convince people that the fight here has been about contraception," Pelosi said.