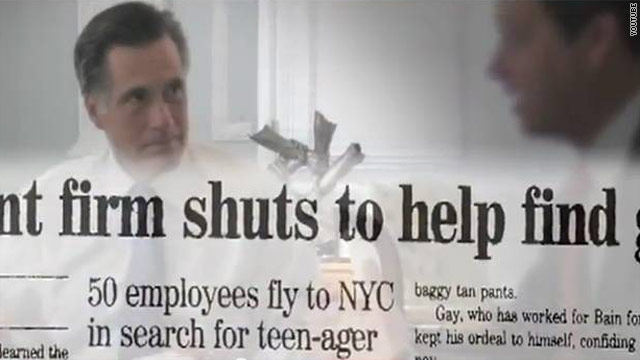 Restore our Future, a super PAC that has spent millions boosting Romney's candidacy, said the television ad would run statewide in Arizona and Michigan ahead of the states' February 28 primaries.

Called "Saved," the spot is nearly identical to an ad released by Romney's presidential campaign in 2007. The earlier ad had a different title – "The Search" – but other elements are the same, including the music and an interview with Robert Gay, described as Romney's former business partner.

Some of the photos of Romney have been updated, but older photos showing Romney with slightly darker hair are still used in the latest ad. The new spot has also been converted to a 16×9 aspect ratio, compared to the older spot which was produced in the 4×3 ratio (think high definition width versus the boxier old standard).

"My 14-year-old daughter had disappeared in New York City for three days. No one could find her," Gay says in both ads. "My business partner stepped forward to take charge. He closed the company and brought almost all our employees to New York. He said, 'I don't care how long it takes. We're going to find her.'"

Gay goes on to identify Romney as the man responsible for helping organize the search.

According to a 1996 article from the New York Daily News, Melissa Gay went missing after attending Fantasia-2, a rave on New York's Randalls Island. The article notes that Robert Gay's firm, Bain Capital, shut down in order to allow employees to help search for the missing girl.

Melissa Gay was later found in the basement of a home in New Jersey, where she had been hiding unbeknownst to the home's owners for six days.