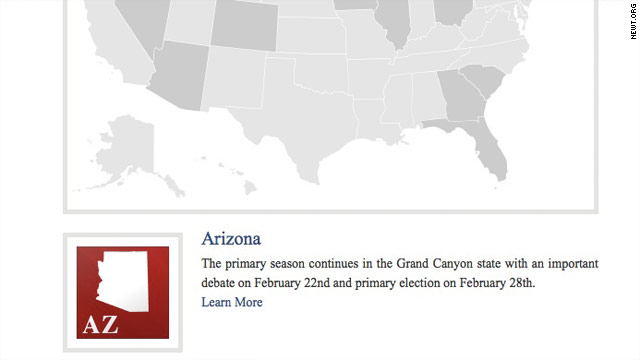 Seattle, Washington (CNN) – Newt Gingrich is focusing on his home state and making an effort in a handful of other contests, but the campaign’s website suggests a scattershot delegate strategy.

The campaign lists Georgia on its website as a “launch pad to victory” and “one of the strongest Newt networks” that can provide a foundation for a nationwide campaign.

Ohio and Michigan are highlighted on the map, and listed along with Georgia and Arizona. Ohio is noted as “one of the most important contests,” but Gingrich is not expected to campaign there before the March 6 primary.

Although the campaign said Michigan “could play a key role in electing a Bold Reagan Conservative,” Gingrich canceled a visit there this weekend.

The Gingrich campaign appears to be, understandably, shifting its strategy and adapting to changes in the race, which the candidate himself has likened to riding a roller coaster in the dark.

But if the ever-changing map and language on Newt.org is any indication, his campaign also appears to be lowering expectations significantly and identifying new benchmarks to judge the campaign’s success.

The following description for Arizona was removed from Newt.org this week, “The Battle Born State will be an early benchmark in the battle for the nomination. As a tipping point for contenders in the early primary states, victory is vital.”

The definitive language was replaced with a generic line about an “important debate” Wednesday and a primary election on Feb. 28.

Gingrich spent time this week in Oklahoma, Arizona, Washington and Idaho, and early next week he’ll visit Georgia and Tennessee. Only two out of those six states were highlighted on the campaign map, until Thursday, when Washington was added the day Gingrich was due to campaign there.

The former House speaker and his campaign have talked openly about competing on Super Tuesday in Ohio, Oklahoma, Tennessee and Georgia so it’s surprising some of those states were not selected.

California is another state Gingrich recently spent time in but is not mentioned on Newt.org. He was there primarily to raise money but held a few events, and he returns Saturday for a speech to the Republican Party in San Francisco. Gingrich has said often that California, with its primary on June 5, could come into play if there’s a drawn-out nomination fight.

Gingrich often points to Texas as a key state to win, but it is also nowhere on his website. He picked up former presidential candidate Texas Gov. Rick Perry as a surrogate and told Eric Erickson on a radio show that “Perry believes we will sweep Texas.”