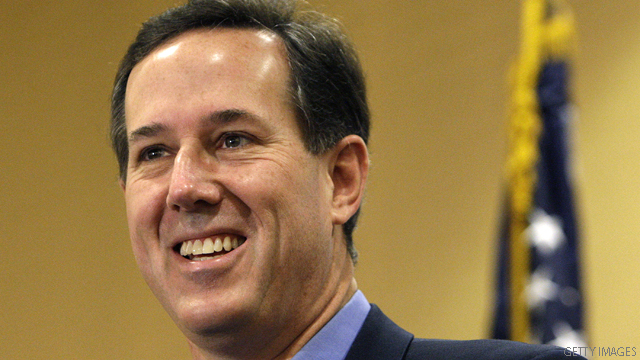 Washington (CNN) - The super PAC supporting Rick Santorum, the Red, White and Blue Fund, will start airing about $257,000 worth of ads in Ohio Friday, a source familiar with the buy confirmed.

The buy, both on statewide broadcast and cable TV, is the first from the PAC in the state set to vote on March 6. Two ads from the group will run through Wednesday.

In one of the spots, titled "Obama," the narrator compares Romney and Gingrich to President Barack Obama to make the case for a Santorum presidency.

"Like Obama, Gingrich supported individual health insurance mandates and lobbied for Freddie Mac," the narrator in the spot says. "Mitt created RomneyCare, the blueprint for ObamaCare ... Who can win? Rick Santorum."

However, there is still a major financial disparity between the group supporting Santorum and the PAC supporting Mitt Romney.

Restore Our Future, which supports Romney, has been on the airwaves in Ohio for several weeks and purchased at least $1.7 million worth of spots through next week.

Ohio will likely be a major primary battleground with Santorum and Romney vowing to campaign heavily in the general election swing state.