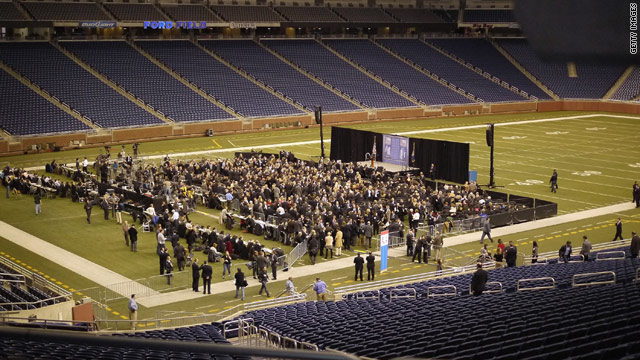 Detroit (CNN) – When Mitt Romney delivered his much-hyped speech here Friday on his plans to fix the economy, much of the buzz surrounding the event focused on anything but economics.

The optics of Romney's speech, hosted and organized by the Detroit Economic Club, were not ideal for a campaign meticulous about image control.

Weeks ago the economic club moved Romney's speech to the cavernous Detroit landmark Ford Field after the campaign said a smaller venue quickly reached capacity. But the audience of 1,200 seated on the AstroTurf in the football stadium appeared dwarfed by the 65,000 seats arcing above them on all sides.

"I guess we had a hard time finding a large enough place to meet," Romney said during his speech. "And this certainly is."

Laughter and applause from the audience were swallowed up in the giant venue, which made the response appear muted to those seated inside.

At one point Romney seemed to reference the quiet after he was asked whether he was the best candidate to challenge President Barack Obama.

"I not only think I have the best chance, I think I have the only chance. Maybe I'm overstating it a little bit," he said laughing. And he encouraged the audience to applaud by pointing out: "I, uh, that's my family leading the applause down here."

Later, Romney made an offhand remark that seemed to broadcast his wealth. A Michigander by birth, Romney told the audience he drove cars manufactured in Detroit.

"I drive a Mustang and a Chevy pickup truck," he said. "Ann drives a couple of Cadillacs actually, and I used to have a Dodge truck, so I used to have all three covered."

In his speech, Romney highlighted a tax plan, outlined earlier this week, that would cut marginal tax rates for individuals by 20%.