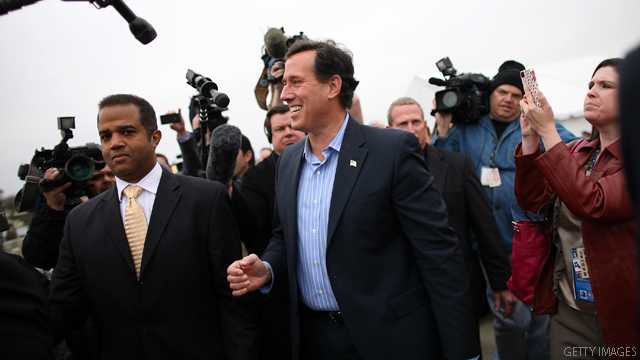 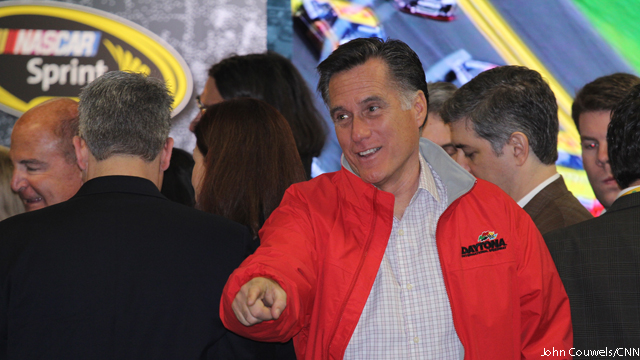 “This combines my two favorite things – sports and cars,” Romney said to the rain-soaked crowd at the Daytona International Speedway.
END_OF_DOCUMENT_TOKEN_TO_BE_REPLACED 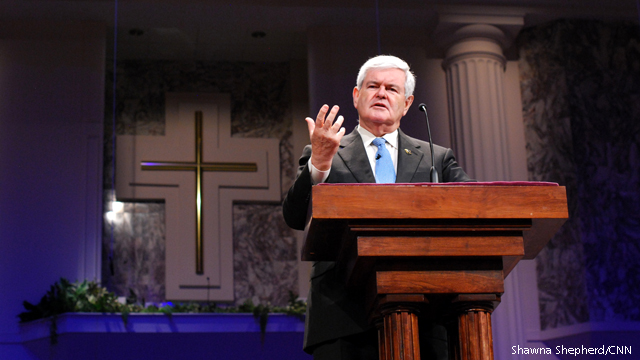 Gingrich, a former Georgia congressman, is favored to win Georgia on Super Tuesday, March 6, but Santorum, who appears to be gaining ground in other early nominating states, poses a threat to the former House speaker.
END_OF_DOCUMENT_TOKEN_TO_BE_REPLACED

(CNN) - For the first time in 11 days, Mitt Romney is back on top in a national daily tracking poll and now holds a narrow advantage over rival Rick Santorum.

According to a Gallup survey, Romney has the backing of 31% of Republicans nationwide, while Santorum comes in with 29%.
END_OF_DOCUMENT_TOKEN_TO_BE_REPLACED

“Rick Santorum is ‘the last conservative standing’,” the mailer blares, quoting Limbaugh from one of his radio broadcasts earlier this month.
END_OF_DOCUMENT_TOKEN_TO_BE_REPLACED 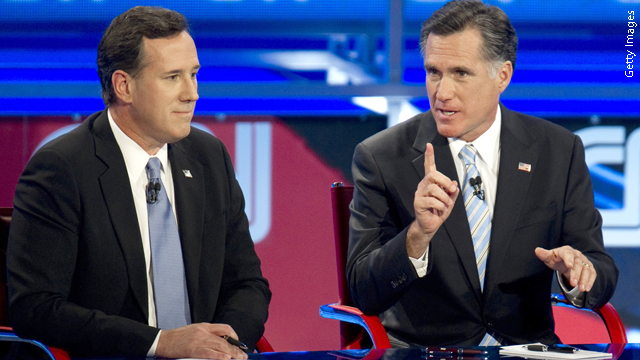 Washington (CNN) - Less than 48 hours before primaries in Arizona and Michigan, Mitt Romney received a key endorsement from Arizona's governor Sunday while his current main challenger, Rick Santorum, appeared to downplay his own chances of winning in the Grand Canyon State.

The two are leading the pack in the Republican presidential campaign that includes former House Speaker Newt Gingrich and Texas Rep. Ron Paul as it heads into a series of crucial contests in coming weeks, including Super Tuesday on March 6 when 437 delegates from 10 states will be at stake. 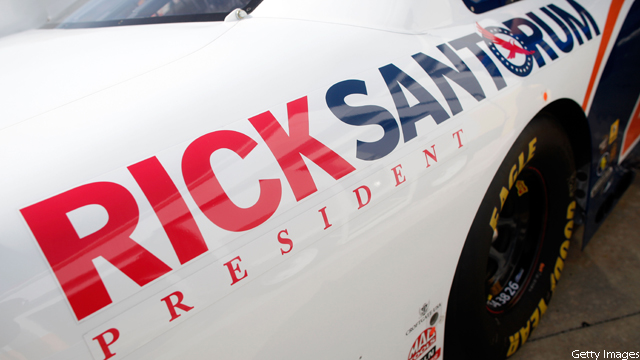 (CNN) – Rick Santorum said he had a few words of advice for veteran NASCAR driver Tony Raines, who's driving a car sponsored by Santorum's campaign in the 54th annual Daytona 500 on Sunday.

"When you're starting way back in the pack, just hang back there for a while," Santorum said, joking about his own recent surge in the Republican presidential race. "Let all the other cars in front of you wreck. And then run hard in the last few laps and win the race."
END_OF_DOCUMENT_TOKEN_TO_BE_REPLACED

(CNN) - Republican presidential candidate Mitt Romney on Sunday responded to questions about his ability to connect with voters, standing by his financial success but acknowledging he also had some flaws.

"You know, I can't be perfect," Romney said on "Fox News Sunday." "I just am who I am."
END_OF_DOCUMENT_TOKEN_TO_BE_REPLACED 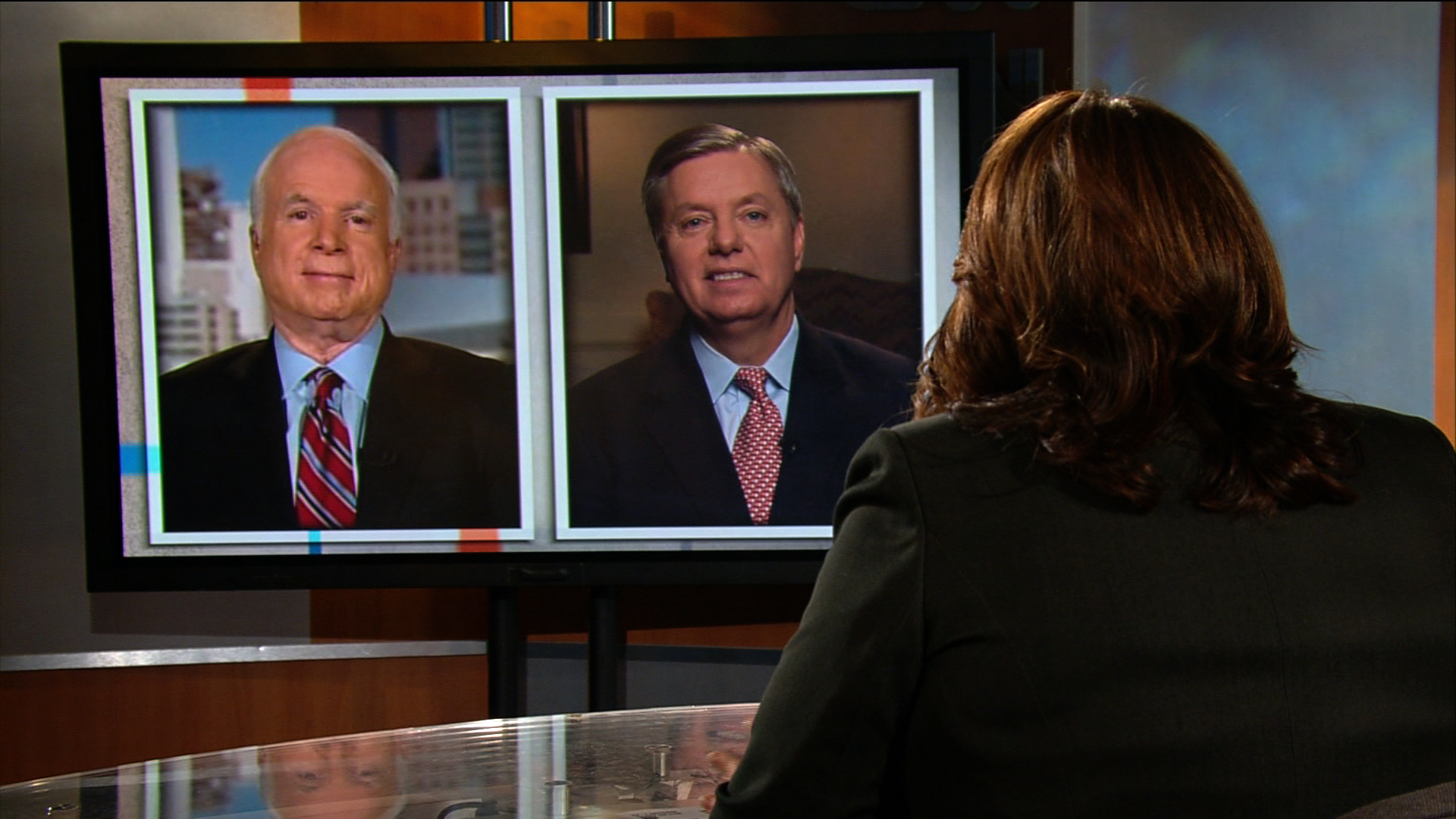 “I think he’s going to win both states,” Graham said on CNN’s “State of the Union,” arguing that Romney is a “better candidate” because of the primary process.
END_OF_DOCUMENT_TOKEN_TO_BE_REPLACED

Rabat, Morocco (CNN) - Criticism of President Barack Obama's apology for the burning of Qurans in Afghanistan is not helpful, Secretary of State Hillary Clinton said Sunday in a wide-ranging interview with CNN.

"I find it somewhat troubling that our politics would enflame such a dangerous situation in Afghanistan," Clinton said of the complaints by Republican presidential candidates and some experts about Obama's apology.