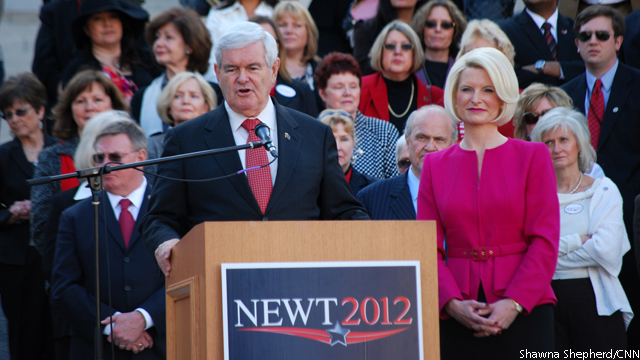 Nashville, Tennessee (CNN) – Newt Gingrich zeroed in on Rick Santorum as a "big-labor Republican" Monday, and said the GOP presidential race is "going to redefine itself again" one week before crucial contests on Super Tuesday.

The longtime Georgia congressman praised his opponent's successful early state strategy but predicted on February 28 Santorum will lose to Mitt Romney in Arizona and Michigan, two states Gingrich ceded so he could focus on March 6 primaries that include his home state and Tennessee, where he campaigned Monday.

"You will see things start to clarify if, as people expect, you end up with a Romney victory in Michigan. I think you'll see Santorum getting a very different look," Gingrich said. "He has had two weeks of being the alternative. The fact is, I think there are profound reasons that Rick lost the Senate race by the largest margin in Pennsylvania history in 2006 and I think it's very hard for him to carry that all the way to the general (election)."

At a luncheon with local Republicans at a Nashville law firm, Gingrich raised some potential red flags for Santorum in the South, pointing to Memphis-based Federal Express as an example.

"And when he comes South - take the case right here - he voted for the unions over FedEx. I suspect most folks in this state don't know that. But in fact, he was a big-labor Republican in Pennsylvania, and I suspect when you get to Memphis and you say to people 'Gee, this is a guy who wanted to guarantee that FedEx gave into the unions,' Santorum won't be quite as popular the following morning," Gingrich said.

Santorum appears to be leading the pack in Tennessee. According to a poll conducted by Vanderbilt University's Center for Democratic Institutions between February 16 and February 22, Santorum leads with 33% among registered and likely voters surveyed. Romney came in second with 17% and Rep. Ron Paul had 13%. Gingrich picked up only 10% but he could benefit from the 27% surveyed who were still undecided.

The former House speaker is hoping a little star power might help him. Monday afternoon he held a rally outside the state capitol where former Sen. Fred Thompson appeared and introduced Gingrich's wife Callista.

Gingrich knows his White House run rests on winning his home state. He said, "We have to do fairly well on Super Tuesday and that starts with Georgia and I'm pretty straight about that."

But the same goes for his competitors.

"I think people have to carry their home state. You've seen Romney scramble like crazy for the last two weeks to carry Michigan. I think Santorum will face the same challenge in Pennsylvania, where I think he frankly will have a much harder time," he said.

Gingrich dismissed Santorum's latest spike that resulted in victories in Colorado, Minnesota and Missouri. The lagging presidential candidate is banking on a scenario in which the three candidates duel it out until the convention in Tampa in August. He suggested he needs Texas and California to be considered a viable candidate in the race.

"My basic hope is to pick up some delegates virtually everywhere, pick up a lot of delegates in the South, in the Southwest, and then with Texas and California be totally in the race," Gingrich said.

The candidate, who acknowledges almost daily this campaign is like being on a roller coaster and he's been counted out more than once, still believes there's time for a comeback.

"I have the longest record of any candidate in this race of being able to somehow re-emerge over and over again," he said.