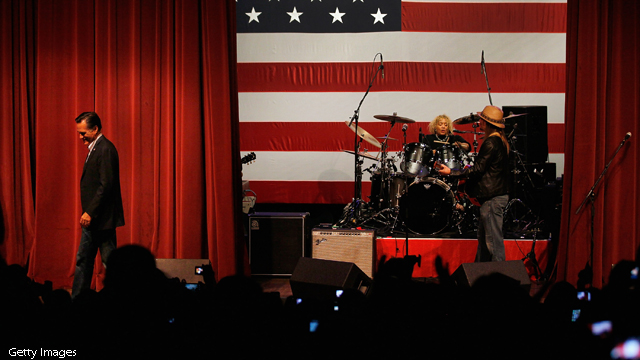 On the eve of Michigan's nail-biter of a primary, Mitt Romney supporters put their hands in the air Monday to welcome bad boy rocker Kid Rock – whose surprise appearance in Royal Oak was a closely held but widely expected campaign flourish.

Rock, who maintains close ties to Michigan, his birth state, played "Born Free" for the audience at the Royal Oak Theater.

The song is Romney's official campaign tune and is played when the GOP candidate enters and leaves the stage at events.

Romney introduced Rock by calling him "a friend."

"I'm happy to introduce a son of Detroit, a friend, a guy who makes great music who introduces me by DVD everywhere I go - Kid Rock!" he said.

During the one-song concert, Romney stood with his wife, Ann, and tapped his foot, clapped his hands and nodded his head to the beat.

A campaign aide said before Rock agreed to perform, he requested a meeting with the candidate at the rocker's home in Milford on Thursday. The two men spoke for about an hour about Romney's commitment to Detroit, Michigan, and the troops.

During the meeting, Romney personally asked Rock if he would perform at his rally. Rock e-mailed the candidate the next day to agree to the idea.