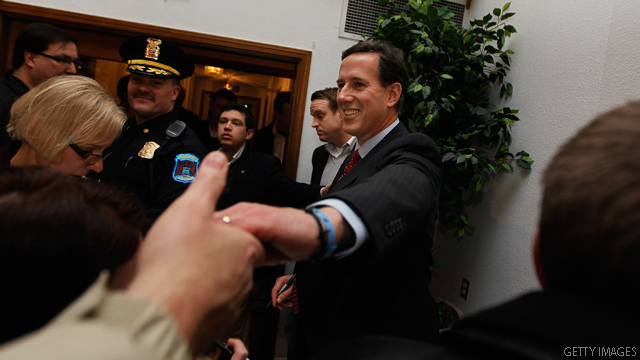 Washington (CNN) – Rick Santorum is the leading Republican presidential contender in Ohio, according to a new survey in the state.

The Quinnipiac University poll released Monday showed the former Pennsylvania senator with 36% support among likely Republican primary voters, followed by Mitt Romney at 29%, Newt Gingrich at 17% and Ron Paul at 11%.

The figures are largely unchanged since the February 15 results, but 45% of voters said they might change their mind before the March 6 Buckeye State GOP primary.

Santorum's standing was aided by his support among men, who he won with 38% support to Romney's 25% and self-identified conservatives, among whom he held a 15-point lead over the former Massachusetts governor.

Women voters were split between the two candidates while self-identified moderates backed Romney with 39% to Santorum's 27%.

The battleground of Ohio, which holds an open primary, is one of 10 states to cast ballots on Super Tuesday, following Tuesday contests in Arizona and Michigan and Saturday caucuses in Washington.

"What happens in Michigan tomorrow night might have an impact on voters in Ohio's Republican primary," Peter A. Brown, assistant director of the Quinnipiac University Polling Institute, said.

Quinnipiac University surveyed 847 likely Ohio Republican primary voters between February 23 and February 26 with a sampling error of plus or minus 3.4 percentage points.