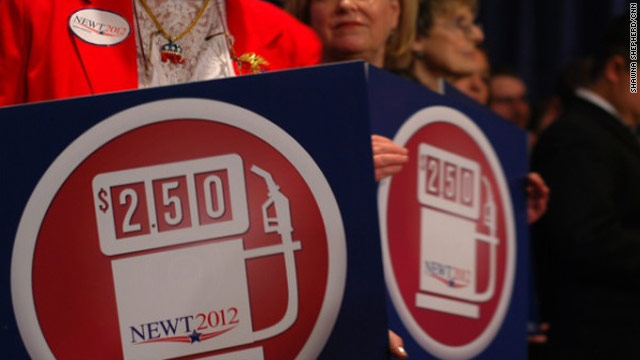 Gingrich banks on Georgia, looks for gas in the tank

Dalton, Georgia (CNN) – With Super Tuesday only a week away, White House hopeful Newt Gingrich has turned his $2.50 a gallon-of-gas policy pitch into a fundraising plea.

The former Georgia congressman and House speaker is campaigning heavily this week for his home state's 76 delegates, all of which would go to him if he gets more than 50% of the vote on March 6.

He said he "deliberately focused" on Georgia and other Super Tuesday states, rather than compete in primary contests held today in Arizona and Michigan, where his Republican presidential opponents Mitt Romney, Rick Santorum and Ron Paul have been aggressively campaigning.

"[W]e thought it would be important to focus here and to focus in Tennessee and in Oklahoma, in Idaho, and Ohio and the states that are going to be on Super Tuesday," Gingrich said. "Winning next Tuesday moves us towards Tampa in a big way. Georgia is the biggest group of delegates up on Super Tuesday, so this is a big deal, and it really, really matters."

Gingrich has invested very little in advertising in recent weeks suggesting the campaign is lacking the funds for expensive television advertising.

"We're going to have some buckets out back – actually gasoline pails that we've cut open to collect money. So if any of you want to help us collect this message, we'd love to have your help cause every penny's going to go right back into advertising this week to help win the primary," he said.

He is getting help from the super PAC Winning our Future, which is currently airing pro-Gingrich ads in Super Tuesday states. The Gingrich campaign did buy airtime for a 30-minute speech on gas prices and an "American energy policy" that was scheduled to run one time in Spokane, Washington; Tulsa, Oklahoma; Nashville, Tennessee; and Macon, Georgia. On Tuesday, Team Gingrich announced they will air additional addresses in Ohio between March 1 and March 5.

In the meantime, Gingrich is trying to get out his message of returning to $2.50 a gallon of gasoline through volunteers and social media. He urges supporters to mention it on Facebook and Twitter. When he has suggested that people create a conversation on Twitter, twice he mistakenly referred to a hash tag as a "hash mark."

He told the Dalton audience, "If you're willing to volunteer, we'll have material I think by tomorrow that you can hand out at a gas station. And I think any of you who are willing to either hold up signs that say gas at – 'Newt = $2.50 a gallon' – along the road, or people who are willing to go to some gas stations to just pass out the material. It really will help focus this issue."