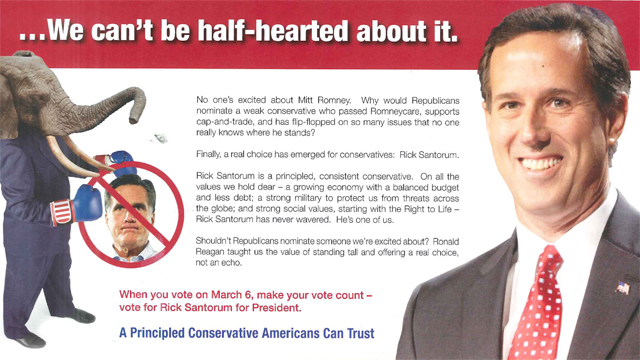 That's the message on a new mailer in Tennessee from "Red, White and Blue Fund," a super PAC supporting Rick Santorum for president.

The mail piece echoes Santorum's frequent argument that Republicans must pick a conservative nominee, not a moderate, who represents a bold contrast to President Barack Obama and can inspire the GOP base in November.

"When Republicans take on Barack Obama … We can't be half-hearted about it," reads the two-sided postcard, which was provided to CNN by a source in Tennessee, one of 10 states voting on Super Tuesday.

The mail contrasts a smiling Santorum next to a grim-faced Romney, and asks: "Why would Republicans nominate a weak conservative who passed Romney care, supports cap-and-trade, and has flip-flopped on so many issues that no one knows where he stands?"