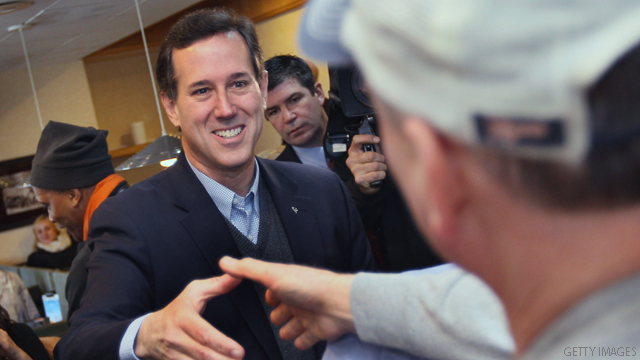 With one week to go until the Buckeye State's Republican presidential primary, Santorum has an 11-point lead over Romney, according to the latest Ohio Poll.

The survey, conducted by the University of Cincinnati, indicates that 37% of likely Ohio GOP primary voters are backing the former senator from Pennsylvania, with 26% supporting the former Massachusetts governor. Sixteen percent say they are backing former House Speaker Newt Gingrich, 11% are supporting Rep. Ron Paul of Texas, with another 11% saying they are supporting a different candidate or are undecided.

Ohio is one of ten states holding contests on Super Tuesday on March 6.

The Ohio Poll indicates that 47% of those who say they are backing a candidate add that they could change their minds over the next week. The results of Tuesday's primaries in Michigan and Arizona could also impact the Super Tuesday contests.

The Ohio Poll was conducted by the Institute for Policy Research at the University of Cincinnati from February 16 through February 26, with 542 likely Republican primary voters questioned by telephone. The survey's sampling error is plus or minus 4.2 percentage points.