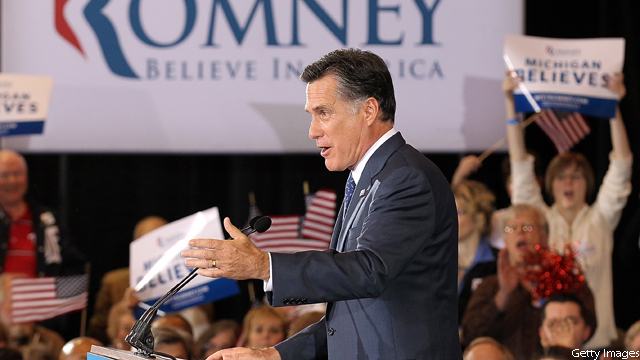 (CNN) - A day after Mitt Romney pulled out victories in Michigan and Arizona, the Democratic National Committee is out with a new video slamming him as out-of-touch.

The two-minute, web-only video is a compilation of Romney’s campaign gaffes and news personalities asking, in the words of CNN’s Soledad O’Brien, “whether he has trouble connecting with voters.”

Its release suggests Democrats once again see Romney as the likely opponent in the general election.

Among the gaffes include the former Massachusetts governor telling a Michigan audience his wife “drives a couple of Cadillacs,” remarking that some of his friends are NASCAR team owners, saying “corporations are people, my friend”, arguing that “banks are scared to death” in this economy, admitting “I’ve worried I was going to get a pink slip,” and telling CNN’s Soledad O’Brien “I’m not concerned about the very poor” among others.

A note accompanying the video argues that these lines show Romney’s “true colors.” DNC Press Secretary Melanie Roussell writes these comments “are windows into the soul of a man running for President who cannot relate to the lives of average Americans. His out of touch positions and pandering to the right wing are causing him to pay dearly among independent, moderate and blue-collar voters who Romney cannot afford to lose in the general election.”

Democrats point to a recent Politico/George Washington University battleground poll that shows 33% of independents have a positive view of Romney, 51% negative.

Republicans argue some of this erosion is the inevitable result of such a negative and relentless primary campaign, but admit concern that it's taking a toll. A senior Republican strategist who requested anonymity criticizing Romney told CNN that he believes the primary process is getting messy and diminishing Romney's appeal and Romney is showing himself to be less effective than many Republicans might have hoped. However, this Republican insisted Romney is still the best candidate in the field. This strategist believes Romney will likely secure the nomination and will have opportunities to polish himself up and give the president a real challenge.

It would seem Democrats are preparing for that likelihood. In the DNC memo Roussell writes, "Mitt Romney wants to cut taxes for his NASCAR team-owning friends" and "while some may laugh at his 'gaffes,' we would argue that these moments show who Mitt Romney really is."