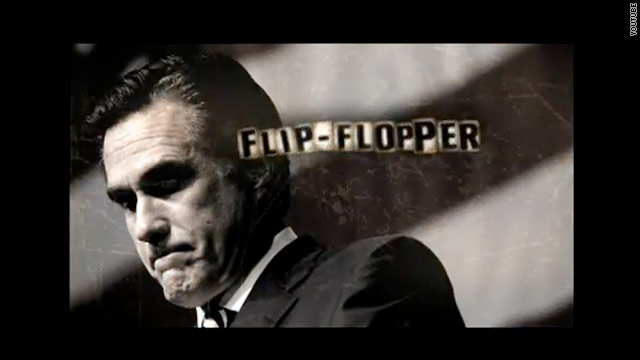 (CNN) – Ron Paul announced Wednesday he was launching television ads in Washington state and Vermont, two states he hopes will give him his first win in the 2012 GOP nominating process.

The 60 second spot running in Washington slams his rivals as uniformly non-conservative, and includes a scathing critique of former Massachusetts Gov. Mitt Romney, who Paul has largely ignored in his attacks during the 2012 election season.

The ad, called "Three of a kind," calls Romney "a flip flopper who's been on all sides, supported TARP bailouts and provided the blueprint for Obamacare."

The attack on Romney is one of the first times Paul has gone after the GOP frontrunner this cycle, sparking criticism from fellow candidate Rick Santorum, who suggested the two coordinated at CNN's Arizona Republican debate on Feb. 22.

On CNN Tuesday, Paul said those claims were false, telling CNN's Wolf Blitzer, "He pulled that out of the air because there's no truth to it. If he wants to spend his energy doing that, you can't do anything about it. He dreamt that up."

In the television ad released Wednesday, Paul also hits the two other candidates in the race, slamming Gingrich as "a serial hypocrite who lobbied for Freddie Mac before the housing crisis," and Santorum as "a counterfeit conservative who opposes right to work, massively increased spending and funded Planned Parenthood."

"Three of a kind" will run on cable in Washington state beginning Wednesday and will air until the state's caucuses on Saturday.

A separate 30 second ad will run in Vermont on cable and broadcast ahead the state's Super Tuesday primary. The Vermont ad is more positive, lauding Paul as "a visionary who predicted the financial crisis."

The spot lays out Paul's plan to improve the American economy, including cutting government bureaucracy and reigning in the Federal Reserve.

"This first leg of our Super Tuesday and pre-Super Tuesday ad buy plan shows our commitment to Washington and Vermont, a dedication to these states and their voters that the other candidates have not shown," Ron Paul National Campaign Chairman Jesse Benton said in a statement.

He continued, "This airtime purchase and forthcoming buys elsewhere advance the delegate-attainment strategy that will help Ron Paul win the Republican nomination as we continue along this exhaustive 50-state campaign, a race we are prepared to stay in and win."