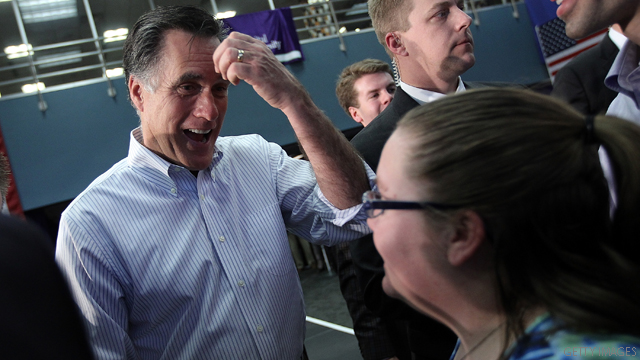 Romney's statement, which came in an afternoon interview with Ohio News Network, quickly reverberated around the Internet and prompted Romney's campaign to clarify that the opposite was true, and that the former Massachusetts governor, in fact, supports the legislation.

"The way the question was asked was confusing," campaign spokeswoman Andrea Saul said in an email blasted out to reporters after Romney's became the subject of a flurry of tweets. "Gov. Romney supports the Blunt Bill because he believes in a conscience exemption in health care for religious institutions and people of faith."

The amendment, drafted by Missouri Sen. Roy Blunt, a Romney supporter, is an attempt by Senate Republicans to confront head-on a simmering controversy over rules governing religious employers and coverage they are required to provide.

The Senate is expected to take up the bill on Thursday.

The uproar was sparked by a move by the Obama administration that would have required employers to provide contraception to their employees - regardless of the employer's religious beliefs. Representatives from the Catholic church advocated strongly against the measure.

The White House has since backed off on that requirement, and instead said insurers must cover birth control if the employer does not.

In the sit down interview with Ohio's ONN, Romney was asked whether he supported the Blunt measure.

"The issue of birth control, contraception, Blunt-Rubio is being debated, I believe, later this week. It deals with banning or allowing employers to ban providing female contraception," asked the reporter, Jim Heath. "Have you taken a position on it? He (Santorum) said he was for that, we'll talk about personhood in a second; but he's for that, have you taken a position?"

Romney responded: "I'm not for the bill, but look, the idea of presidential candidates getting into questions about contraception within a relationship between a man and a women, husband and wife, I'm not going there."

As they worked to fix the off-message comment, which was already being circulated to reporters by conservative political operatives, the Romney campaign criticized the "rushed" nature of the question and pointed out that the amendment does not "ban" contraception.

For his part, Romney, appearing on the Howie Carr radio show after the ONN interview, said he misunderstood the question.

"I simply misunderstood what he was talking about. I thought it was some Ohio legislation that, where employers were prevented from providing contraceptives so I talked about contraceptives and so forth. I really misunderstood the question," Romney said. "Of course Roy Blunt who is my liaison to the Senate is someone I support and of course I support that amendment. I clearly want to have religious exemption from 'Obamacare.'"

Meanwhile, Obama's re-election team wasted no time Wednesday pouncing on Romney's comments, saying in a statement that Romney showed in one hour "why women don't trust him for one minute."

"It took little more than an hour for him to commit his latest flip-flop," Stephanie Cutter, deputy campaign manager, said in the statement. "Even worse, he ended up on the wrong side of an issue of critical importance to women.”

Also piling on the criticism, Santorum's campaign released a statement accusing Romney of giving a "troubling" first reaction to the question.

"As Governor, Mitt Romney has a clear record of taking away the freedom of religion," Santorum's national communications director Hogan Gidley said in a statement. "We all know Romney's liberal record on this, so when he's asked a question about a bill that would protect our religious freedom – and Romney's gut reaction is to say he'd oppose it – we shouldn't be the least bit surprised."