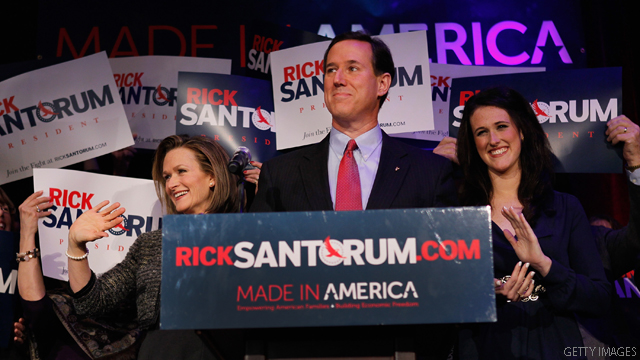 (CNN) – Armed with a new delegate count, a Rick Santorum adviser on Wednesday painted Tuesday's contests as a "disaster" for Mitt Romney.

John Brabender said the campaign's count proves Santorum and Romney are tied in delegates won, which he said means the state should be classified as a split-decision instead of a win for Romney, who captured the popular vote.

"You can only look at Michigan and move it from a win for Mitt Romney to a tie race," Brabender said on a conference call with reporters. "If we can do this well in Romney's home state we clearly think this bodes well for Super Tuesday states."

The latest estimates from CNN showed both candidates with 15 Wolverine State delegates, while Romney is ahead in the popular vote with 41% to Santorum's 38%. That leaves none of the thirty total Michigan delegates still in play.

Brabender also defended the campaign's courtship of Democratic voters in the state's Republican presidential primary, saying they targeted conservative members of the opposite party.

"I said from day one one of the reasons we're best suited is our appeal to Reagan Democrats and to get them to cross over," Brabender said, adding the campaign probably spent no more than a few thousand dollars on the effort intended to reach conservative Democrats.

The Santorum campaign attempted to rally Democrats behind his candidacy through robo calls in the state with Romney's opposition to the auto bailout. Michigan's primary was open to all voters.

More than half of Michigan Democrats who voted Tuesday backed Santorum, but it is impossible to say how much of the roughly 10% of Tuesday voters who described themselves as Democrats were influenced by the Santorum calls.

The former Pennsylvania senator won the most liberal and most conservative voting blocs in the state, while Romney had the edge with everyone else.

Romney's campaign preemptively responded to the conference call, saying Santorum made a "colossal mistake by inviting Democrats to come into the Republican primary in Michigan."

"Republicans should choose the nominee, not Democrats," Romney Campaign Manager Matt Rhoades said in an email. "Rick Santorum needs to apologize and pledge that he won't resort to these dirty tactics on Super Tuesday."