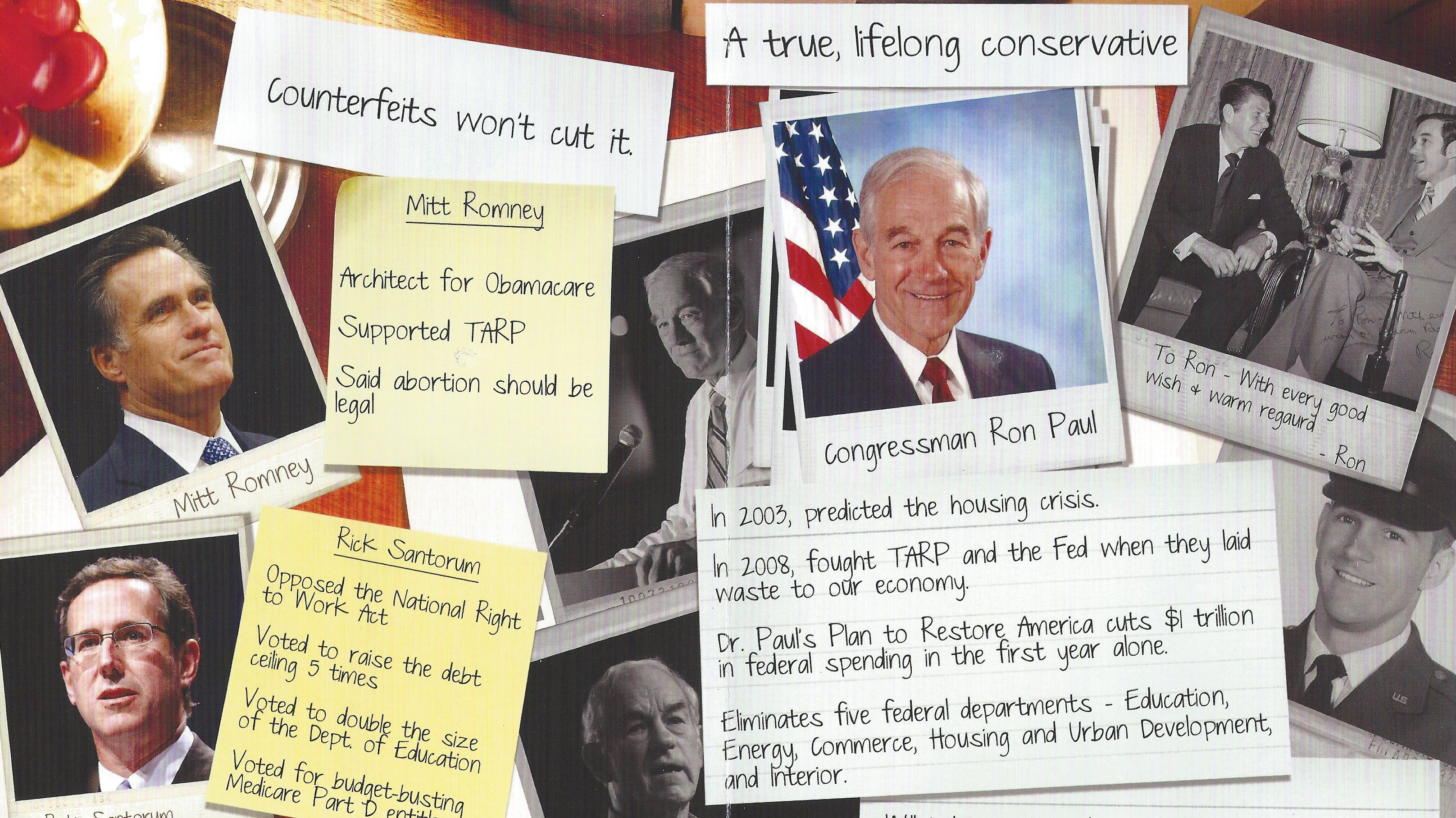 Next to each picture of each contender it lists some of his positions that would upset conservatives.

Next to Mitt Romney it lists “Architect for Obamacare; Supported TARP; Said abortion should be legal.” Among the items next to Rick Santorum it says: “Opposed the National Right to Work Act; Voted to raise the debt ceiling 5 times and Voted for budget-busting Medicare Part D entitlement.” Next to Newt Gingrich it says: “Supported Obamacare; Supported Cap and Trade; Supported Government bailouts.”

The mailer, obtained from a Republican voter in the state, calls Paul a "true, lifelong conservative” who fought the bank bailout called TARP, and vows if elected president he will balance the budget by his third year in office, and eliminate federal departments.

While Paul has been very critical of Santorum and Gingrich on the stump and in campaign ads, he has not been as hard on Romney.

Paul’s most recent television spot took direct aim at Santorum, as the announcer recounts some of the former Pennsylvania senator’s votes, such as on the debt ceiling and Medicare expansion, then says: “Rick Santorum: Fiscal Conservative” followed by “Fake.” When Gingrich was rising in the polls in January, Paul’s commercials criticized the former House Speaker as someone who sold access and then put the words “Serial Hypocrisy” on the screen.

Paul’s campaign did air a commercial in October of last year touting the candidate as the consistent conservative, as it went through some of the other candidates’ positions, including Romney defending his prior support for the Wall Street bailout.

Santorum and his campaign advisers indicated last week they thought there was some type of alliance between Romney and Paul. In an interview last week with CNN Chief Political Analyst Gloria Borger on “The Situation Room,” Santorum said, “I just found it odd that, you know, Ron Paul supposedly, you know, holds himself out as the libertarian in the race. Certainly, not the conservative, his conservative ratings are pathetic but holds himself out as a libertarian. And someone who is ... for little government that to my knowledge has never attacked Mitt Romney on any of the big government things that he’s supported over the years, and seems to delight in attacking me.”

In a separate interview with CNN’s Wolf Blitzer on Tuesday, Paul rejected the idea he was in cahoots with Romney. “He pulled that out of the air because there’s no truth to it. If he wants to spend his energy doing that … you can’t do anything about it. He dreamt that up. I think he should talk about the issues instead.”

Paul said he had attacked Romney earlier as a “flip-flopper” and said in debates he runs against all of three of his fellow candidates “because they are very similar,” and added, "I think the only difference I’ve been able to observe is quite possibly, would be management styles on their personalities on how they would do things, but philosophically, there’s no different. I don’t hesitate to point out our differences no matter who it is."

“Some people are much more into conspiracies than others. If Santorum is an addict on conspiracies, I guess he’s going to have to keep talking that way,” Paul said.