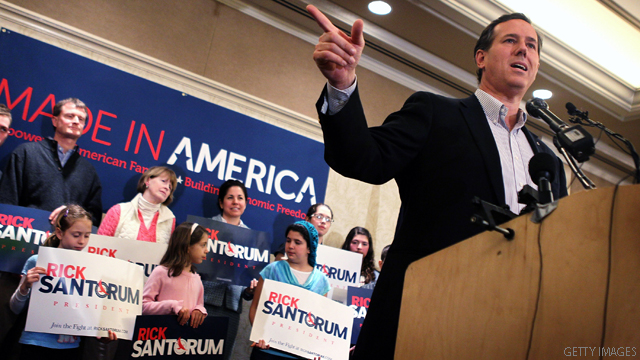 "We saw an insight into what's in the gut of Gov. Romney yesterday," Santorum said during a campaign speech in Atlanta. "When Gov. Romney was asked that question his knee jerk reaction was no, I can't be for that."

Romney was forced to explain his stance on a controversial Senate amendment that would allow employers to opt out of health care coverage they disagree with on moral grounds after he came out against the legislation. He later said he supported the provision and "misunderstood" the inquiry from a reporter.

But Santorum seemed to question Romney's explanation while reassuring voters of where he stands ahead of contests in Washington on Saturday and in 10 states, including Georgia, on Tuesday.

Romney has since repeated his support of the amendment, drafted by Missouri Sen. Roy Blunt, a supporter of the former Massachusetts governor. The provision, which failed Thursday, was an attempt by Senate Republicans to confront a simmering controversy over rules governing religious employers and health care coverage they are required to provide.

In reaction to Santroum's latest comments, Romney spokesperson Andrea Saul said Santorum's "'gut reaction' is to 'take one for the team' instead of standing up for what he says he believes in."

"Rick Santorum plays for Team Washington, while Mitt Romney's team is the American people," Saul said in an email.