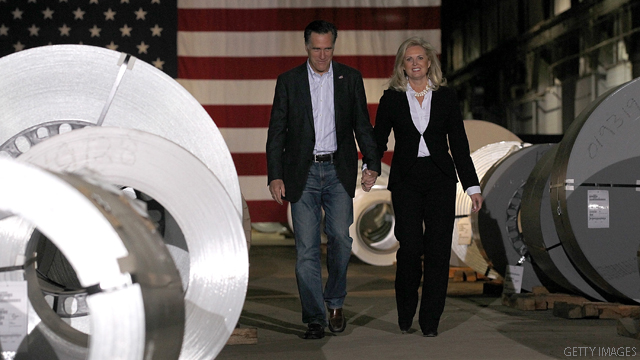 "Mitt's father would be cheering and would be with Mitt 100%," Ann Romney said on Fox News. "What Mitt suggested, what's finally what happened, is that they just went through a structured bankruptcy. It's exactly what ended up happening. Mitt just said to do that before they spent $17 billion."

During a speech this week to the United Auto Workers National Community Action Program Conference, Clinton said "Every time I hear Mr. Romney talk about this, I think his daddy must be turning over in his grave."

But Ann Romney was defiant in her stance.

"No, Mitt's father would be cheering, cheering with Mitt," she added.

Romney's father, the late George Romney was an American Motors executive and three-term governor of Michigan.

The younger Romney repeatedly defended his stance toward the auto bailout while campaigning for the Michigan primary, which he won Tuesday night.

The former Massachusetts governor opposed the federal bailout put in motion by former President George W. Bush and continued by President Barack Obama and instead advocated for a managed bankruptcy.