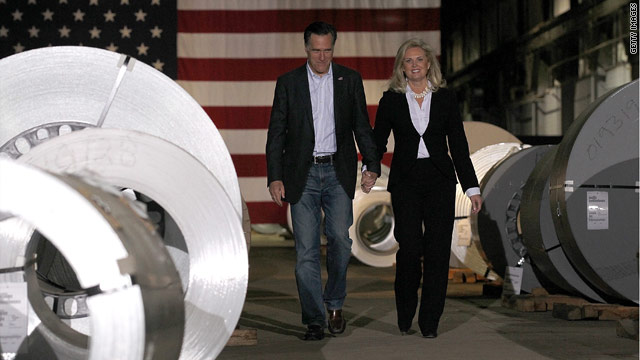 Ann Romney tries to steer GOP conversation back to the economy

Columbus, Ohio (CNN) – As polls show President Barack Obama making gains among women voters while the Republican candidates grapple with questions about contraception, Ann Romney tried Friday to steer the conversation back to the economy.

"I love it that women are concerned and voting for economic reasons," she told a handful of supporters at her husband's Ohio campaign headquarters in Columbus. "Moms are very angry about the deficit spending in Washington, D.C.

"They're very upset about the burdens their children are going to inherit and they think it's irresponsible for us to pass along that burden to our children and grandchildren," she said." So that's what I am hearing and I think women in the general election are going to make a huge difference in this nation. And women for the first time are going to be voting their pocketbooks, which is great."

Her comments came 48 hours after Mitt Romney embraced a controversial, and ultimately unsuccessful, Senate amendment that would have allowed religious employers to opt out of providing contraceptive coverage.

Questions about social issues continue to nag Romney at a time when he would clearly prefer to be focusing his message on the economy, and the emergence of the fiercely conservative Rick Santorum as his main GOP rival has done little to help matters.

Hoping to shore up support among women and portray Romney as too extreme for the White House, the Obama campaign is framing the contraception debate as a Republican effort to restrict the reproductive rights of women and meddle in private bedroom matters.

Ann Romney, though, said the women she encounters along the campaign trail are chiefly concerned with the troubled economy, particularly the debt.

"That's what I am hearing from women out there. They are saying, 'please Mitt, please listen to us, do something about it,'" she said. "And they are getting behind us for that economic reason. So this is going to be a message in an election about the economy and about jobs."

Asked by a reporter if she is concerned that the sharp focus on reproductive issues was damaging her party's image with female voters, Romney ignored the question.