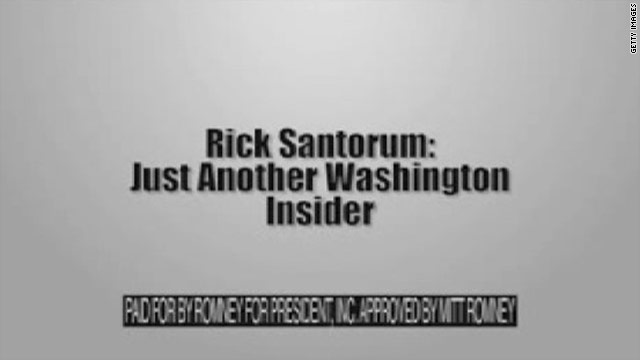 Romney ad goes on the attack in Ohio

The commercial, which started airing Thursday, emphasizes how Santorum has seemingly shifted positions on whether the government should support clinics that provide contraception and other health services for women.

In the new spot the announcer first states that while in the Senate Santorum voted for funds for Planned Parenthood and then used an old clip of him saying "I support Title X."

Santorum has explained the distinction by saying he voted for appropriation bills that included the Title X money because he supported what else would be funded. He said in the CNN debate "there were things in there I didn't like, things in there I did, but when it came to this issue, I proactively stepped forward and said that we need to do something at least to counterbalance it."

The spot hits Santorum saying "except he gets caught" and then uses this clip from the CNN debate: "I have a personal moral objection to it even though I don't support it, that I voted for bills that included it." What the former Pennsylvania senator then added that is not included in the commercial is that "I made it very clear in subsequent interviews that I - I don't support that," which was met by boos in the audience.

"I've never supported it - and - and have - and on an individual basis have voted against it. And that's why I proposed Title XX to counterbalance," which funded abstinence education, Santorum said.

The ad tries to paint Santorum as unprincipled when it says "Rick does this a lot" and then uses a different snippet of Santorum talking at the debate "It was against the principles I believed in, you know, when you're part of the team sometimes you take one for the team." There he was talking about his vote for the "No Child Left Behind" education reform bill. Now he says that vote was a mistake.

The super PAC pushing Romney, Restore Our Future, also released a new ad Thursday, hitting Santorum on the same themes. Airing in Ohio, Tennessee and Oklahoma, the spot argues "Santorum says he's the principled conservative, but that's not how he voted."

It then uses the same clip the Romney campaign commercial used, saying he had a "personal moral objection" to those funds but voted for bills including the money.