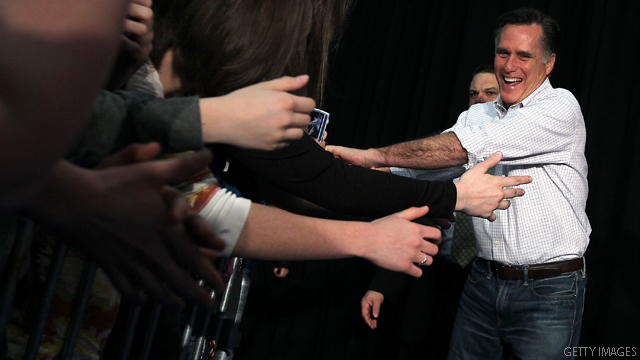 (CNN) - Mitt Romney holds a commanding lead in Virginia, but a new poll also indicates that he's that not so popular among Republican primary voters in the Super Tuesday state.

According to a Roanoke College survey released Thursday, 56% of people likely to vote in Virginia's March 6 primary say they're backing the former Massachusetts governor, who's making his second bid for the GOP nomination. Twenty-one percent are supporting Rep. Ron Paul of Texas. The poll indicates Romney leads Paul among all demographics except younger voters.

Former Sen. Rick Santorum of Pennsylvania and former House Speaker Newt Gingrich failed to get on the ballot in Virginia, and won't be able to compete for the 36 delegates up for grabs. Virginia is one of ten states to vote on Super Tuesday.

But what if Santorum and Gingrich were on the ballot?

"To state the obvious, it appears inevitable that Mitt Romney will win the primary," said Harry Wilson, director of the Institute for Policy and Opinion Research at Roanoke College. "But with a higher unfavorable rating (36% favorable, 37% unfavorable) among those voting, he is not an overly popular choice. Whichever candidate gets the GOP nomination, he will have a lot of work to do in Virginia."

The Roanoke College poll was conducted from February 13 to February 28, with 377 likely Republican primary voters in Virginia questioned by telephone. The survey's sampling error is plus or minus five percentage points.