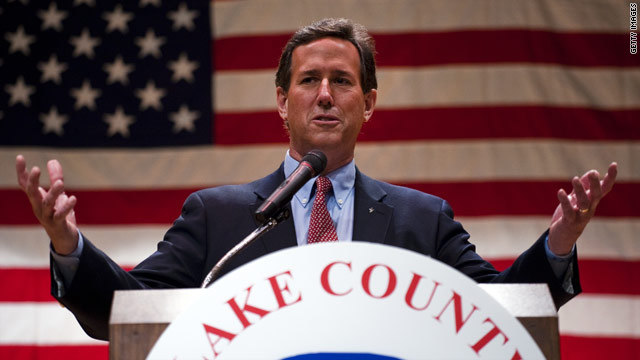 (CNN) – In the race to accumulate delegates to the GOP convention, Rick Santorum faces what could be a setback in Ohio.

Santorum, the former senator from neighboring Pennsylvania, has topped his rivals in several recent polls in this crucial primary state, but did not submit a full slate of delegates in nine of the state's 16 congressional districts. This campaign misstep leaves him unable to claim almost one third of the 63 delegates up for grabs in Ohio when the state joins nine others in holding contests on Super Tuesday.

He is eligible to win some or all of the 15 state-wide at-large delegates and up to a full slate of delegates in seven congressional districts where his campaign did submit a proper list.

Besides being an important primary state, Ohio is a key battleground in the general election, and the November winner has taken Ohio in each presidential election since 1972.

Santorum has gained significant ground since mid-January, when polls indicated former Massachusetts Gov. Mitt Romney ahead. By a month later, thanks to a surge following his sweep of three contests on February 7, Santorum was leading Romney by seven points in one survey and 11 points in a second poll. But a new survey by Quinnipiac University released Friday, following Romney's big victory in Arizona and his edging out of Santorum in Michigan, indicated Santorum just four points over Romney, which was within the poll's sampling error.

His campaign submitted no delegates in three districts, and partial delegate slates in six other districts, a state Republican official told CNN. Three delegates are tied to each individual congressional district, for a total of 48, and 15 are tied to the statewide vote.

Should Santorum be poised to claim delegate seats for which he did not submit, those seats would be unallocated, and Santorum – or another candidate – could contest those seats.

He is eligible to win some or all of the statewide at-large delegates. If one candidate receives a majority of the popular vote, he claims all 15 of these delegates; if no candidate wins a majority, these delegates are distributed proportionally among the candidates who receive over 20% of the vote.

His campaign said the mistake was made when their effort was focused on winning contests in other states - and those victories made Santorum competitive in Ohio.

"The attempt by the establishment to deceive the voters of Ohio and further their hand picked candidate will be met with resistance on Tuesday," Santorum campaign spokesman Hogan Gidley said. "I want to be clear, Rick Santorum's name will appear on every ballot in the state of Ohio and every vote cast will go towards his At-Large Delegate Allocation.

"As it relates to individual congressional districts, its clear we aren't the establishment hand picked candidate and back in December we were a small effort focused on Iowa. Now that we've won several states, obviously much has changed and we feel confident that we will do well in both the delegate and popular vote count on Tuesday," Gidley continued.

On Tuesday, a state GOP official said, "there could be as few as zero unallocated delegates, or as many as nine. This is because Santorum failed to file a full slate of district delegates in each congressional district."

Santorum's election night party will take place in the state's 6th district, where he is eligible for no district delegates.

Romney's campaign said the misstep shows Santorum's organization can not handle the rigors of a national campaign.

"Rick Santorum has failed to get on the ballot in Virginia, has failed to file full delegate slates in Tennessee, New Hampshire and Illinois, and has failed to submit enough delegates in several Ohio congressional districts," Romney spokesman Ryan Williams said. "The fact that he cannot execute the simple tasks that are required to win the Republican nomination proves that Rick Santorum is incapable of taking on President Obama's formidable political machine."

Ohio representative and Romney supporter Mike Turner told reporters on a campaign conference call that Santorum "approached getting on the ballot in Ohio haphazardly."

"I think what this shows is just a half hearted attempt to represent Ohio," Turner said, adding, "running for president is sort of a competency exam for being president and voters don't want to pick someone to run for president or to be their president who is not even bapabpe of getting on the ballot everywhere. "

In Michigan, which voted on Tuesday, Santorum and Romney initially appeared to win 15 delegates each, but the state party announced on Thursday that two of the delegates would be awarded at-large to Romney, who won the popular vote. Earlier in February, Santorum won the Missouri primary, but netted no delegates, as the contest was non-binding. He did win delegates from his victories in the Colorado and Minnesota caucuses.

This story was first reported by Ohio newspapers.

Romney currently leads Santorum in the delegate race, 182 to 79 in the CNN estimate. Ohio's 63 at-stake delegates are among the 419 up for grabs on Super Tuesday.