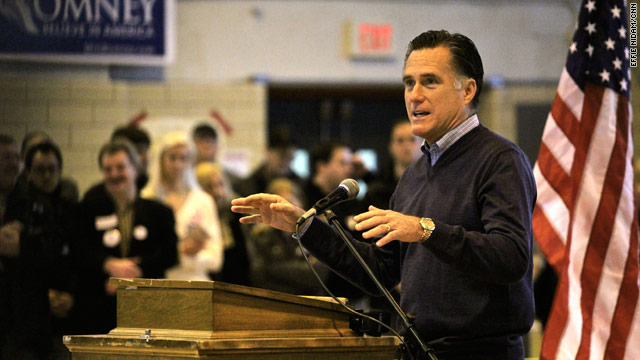 (CNN) - Strong support by Catholic voters in Ohio appears to be one reason why Mitt Romney is now deadlocked with Rick Santorum, according to a new survey released one day before the state holds its Super Tuesday Republican presidential primary.

A CNN/ORC International poll released Monday indicates that it's a dead heat between Romney and Santorum, with both the former Massachusetts governor and the former senator from Pennsylvania each grabbing 32% of likely GOP primary voters in Ohio. Former House Speaker Newt Gingrich is at 14%, with Rep. Ron Paul of Texas at 11%.

"The surprise is that the Catholic candidate, Santorum, is losing the Catholic vote," says CNN Polling Director Keating Holland. "Among Ohio Catholics who are likely to vote on Super Tuesday, 39% back Romney compared to 33% who support Santorum. Santorum has an advantage among Protestants by a 35%-to-29% margin."

Romney's advantage among Catholics is within the sampling error. Last week exit polls in neighboring Michigan indicated Romney had an advantage with Catholic voters in that state as well. Both Michigan and Ohio have sizeable Catholic populations.

The CNN/ORC survey is the fifth released over the past day and a half to indicate that it's all tied up in Ohio. Surveys released a week ago suggested that Santorum led Romney, but they were conducted before Romney's large victory last Tuesday in Arizona and his edging out of Santorum to win his native Michigan.

"Ohio is yet another state in which Republican primary voters are split ideologically," says Holland. Romney has an 18-point advantage among moderates, while Santorum is up by eight among conservatives."

Sixty-three delegates are up for grabs Tuesday in Ohio, one of 10 states to hold contests on Super Tuesday. Although more delegates are at stake in Georgia, Ohio is arguably the most crucial of the states holding a Super Tuesday contest because of its status as a major general election battleground, and both Romney and Santorum have campaigned hard to take the state.

But Georgia is crucial for Gingrich, who's said repeatedly over the past week that he needs to win the state. Gingrich represented Georgia's sixth congressional district for two decades.

The poll indicates Gingrich is enjoying home field advantage, with a 23 point lead over Romney in the state. Gingrich is at 47% among likely GOP primary voters, with Romney at 24%, Santorum at 15% and Paul at 9%. Other recent surveys in Georgia also indicated Gingrich with a double digit lead.

Two-thirds of people questioned in Georgia said they were definitely backing the candidate they are currently supporting, with three in ten saying they may change their minds, and 5% unsure or not supporting a candidate.

In Ohio, 53% said they were committed to the candidate they are currently backing, with 37% saying they could change their minds, with one in ten either unsure or not backing a candidate.

Besides being a crucial primary state, Ohio is also an extremely important battleground state in the general election. According to the poll, 49% of Ohio registered voters would back President Barack Obama in November, with 45% supporting an unnamed Republican nominee.

In Georgia, which has been a reliable Republican state in presidential contests, the poll indicates Obama deadlocked at 48% against the eventual GOP nominee.

The CNN poll in Georgia was conducted by ORC International, with 1,775 registered voters, including 527 registered voters likely to cast ballots in the Georgia GOP primary, questioned by telephone.