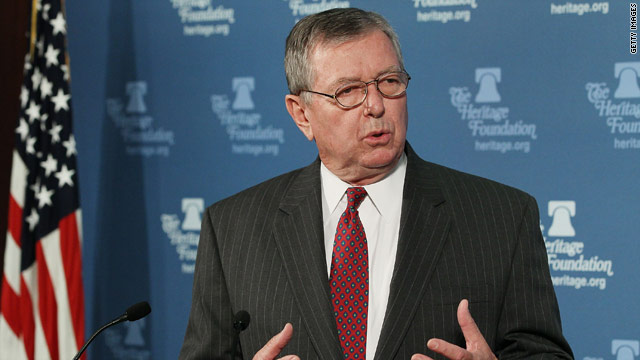 (CNN) – John Ashcroft, who served as U.S. attorney general in the administration of George W. Bush, became one of the first major names from that White House to endorse a presidential candidate Monday.

Ashcroft backed former Massachusetts Gov. Mitt Romney, saying in a statement, "No other candidate stands out for his executive leadership experience or ability to accomplish difficult tasks as does Mitt Romney."

Romney reciprocated by complimenting Ashcroft's commitment to "serving our country and protecting its citizens," and mentioned that he worked with Ashcroft during the 2002 Salt Lake City Winter Olympics.

Ashcroft, who served as the head of Bush's Justice Department from 2001-2005, joined former U.S. ambassador to the United Nations John Bolton as the two most well-known members of Bush's administration to endorse a candidate. Bolton, now a contributor on Fox News Channel, backed Romney in January.

Bush's Secretary of Homeland Security Tom Ridge endorsed Jon Huntsman in September, but hasn't come out in support of another candidate since Huntsman dropped his bid for the nomination in January.

Former President George H.W. Bush and his wife Barbara Bush came out in support of Romney in December. Jeb Bush, the former governor of Florida, has yet to endorse a candidate.

Other major players from Bush's era, including the former president himself, have largely stayed out of the 2012 GOP contest. Endorsements have yet to come from former Vice President Dick Cheney, former Secretaries of State Colin Powell and Condoleezza Rice, former Defense Secretaries Donald Rumsfeld and Robert Gates, and former Labor Secretary Elaine Chao.

On the trail and in debates, the candidates rarely mention the period from 2001-2009 when Bush was president. While they all advocate extending tax cuts on the wealthy implemented by Bush, many of his other programs have become radioactive for candidates on the trail.

No Child Left Behind, the educational reform program pushed by Bush in 2001, became a touchstone at the last CNN debate in Arizona. Rick Santorum became a punching bag for saying he "took one for the team" by voting for the measure, and that the bill stood opposed to the "principles I believed in."

A similar dividing line was drawn at the Arizona debate on the federal government's bailout of the auto industry, a program that began under Bush and continued during President Barack Obama's administration.

All four candidates said they oppose government bailouts of industries, though they differed on whether or not the auto bailout was a good idea. Romney and Gingrich both said automakers should have gone through a bankruptcy process instead of receiving a federal bailout.

Dissatisfaction on government spending under Bush, while not derided outwardly on the campaign trail, is reflected in the candidates' pledges to reduce the federal debt, which expanded in the years Bush was president.