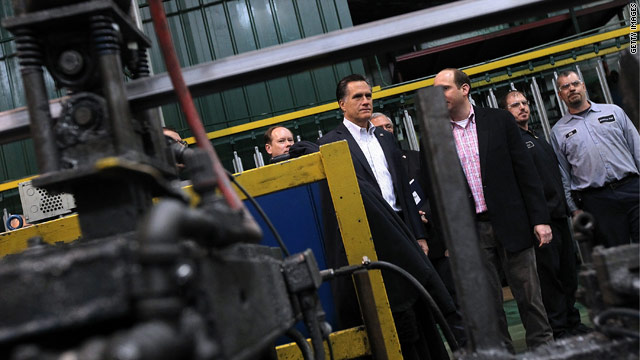 (CNN) - One day before the state joins nine others in holding Super Tuesday GOP presidential nomination contests, two new polls out Monday afternoon indicate it's all tied up.

According to an American Research Group survey, 35% of likely Ohio Republican primary voters say they are backing former Massachusetts Gov. Mitt Romney, with 28% supporting former Sen. Rick Santorum of Pennsylvania. Romney's seven point advantage is just within the survey's sampling error, meaning it's all knotted up.

The poll indicates that former House Speaker Newt Gingrich has the backing of 18% of likely primary voters, with Rep. Ron Paul of Texas at 13%.

Meanwhile, according to a Suffolk University poll also released Monday, Santorum is at 37%, with Romney at 33%, Gingrich at 16% and Paul at 8%. Santorum's advantage is also within the poll's sampling error.

The American Research Group poll was conducted March 3-4, with 600 likely GOP primary voters in Ohio questioned by telephone. The survey's sampling error is plus or minus four percentage points.

The Suffolk University poll was also conducted Saturday and Sunday with 500 likely Republican primary voters in the Buckeye state questioned by telephone. The survey's sampling error is plus or minus 4.4 percentage points.