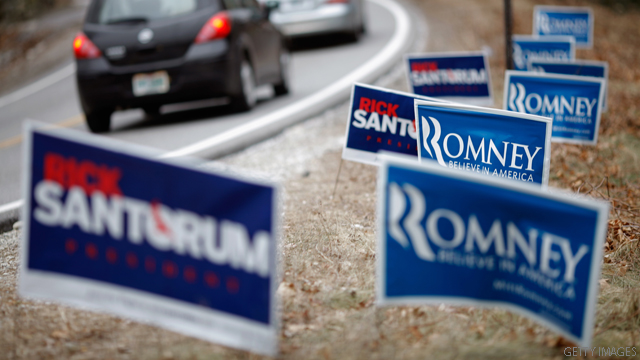 Atlanta (CNN) – With the prospects that voting on Tuesday will likely produce a divided outcome, two of the super PACs supporting Republican candidates are already on the air in the states voting next week.

Both Winning Our Future, which is backing Newt Gingrich, and the pro-Mitt Romney Restore Our Future have bought commercial time in Alabama and Mississippi, which vote next Tuesday and which are key Southern contests. Restore Our Future confirmed it has purchased $640,000 of additional air time beginning Wednesday in those two states on top of $715,000 worth of commercials now on the air there.

In the four states voting this Tuesday where all of the candidates are participating and which have the largest delegates at stake (Georgia, Ohio, Oklahoma and Tennessee) the super PACs supporting Romney, Gingrich and Rick Santorum will have spent more than $8 million for television commercials by the time of the primary. That is much more than the three candidates' campaigns they are supporting. The super PACs are also mounting efforts behind the scenes to spread their messages: making phone calls, sending mailers and some even hiring field staff illustrating how instrumental they have become.

"I think in some cases they are actually bigger than a campaign. I think they are not only a shadow campaign but larger," Curt Anderson, a veteran media consultant who worked for the Rick Perry campaign this year, said.

According to the voter, the narrator of the call said "Rick Santorum has a history," a reference to his votes for congressional earmarks when he was in the Senate. It went on to say liberals are scared because "They know Mitt Romney is the only candidate who can beat Barack Obama in November."

"You know the facts about Rick Santorum's record as a big spending Washington insider," the call continued.

Voters in Tennessee got a mailing from the Red, White and Blue Fund, which is supporting Santorum's bid, touting his conservative backers, including a quote from radio talk show host Rush Limbaugh calling the candidate "the least corrupted, who has the least number of periods of wandering off the reservation."

Because these committees can raise unlimited funds and don't have to worry about supporting a presidential campaign apparatus, they have more resources to commit.

"We have an ability to raise more money that a candidate does," said Rick Tyler, an adviser to Winning Our Future.

Tyler said he sees his group's function as "expanding the campaign's capabilities" and to supplement it.

"We will do everything a campaign will do" except move the candidate around, Tyler said. "We think like a campaign."

One complication for these groups: since they can't coordinate activities with candidates they have to make their best judgments about the messages they should be emphasizing. They watch what the candidates say and what the public messages of the campaigns. Also, these organizations often have employees who have previously worked with the candidates so they know them pretty well.

One advantage for the campaigns is that the attack messages put out by these groups don't carry the footprint of the individual candidates, although the PACs have to make sure they don't do anything that would bring negative attention.

When Winning Our Future aired ads criticizing Romney's time as head of Bain Capital, some conservatives criticized the group as attacking capitalism. Tyler said he wanted to make sure those ads didn't do more damage than good.

"I do think we helped Newt in South Carolina," Tyler said.

Anderson previously worked for the Republican National Committee touting candidates separately from the campaigns and said he made sure his efforts would not end up hurting them.

"You really are terrified. Does something blow up? [It's] not going to just hurt myself but hurt the campaign," he said.