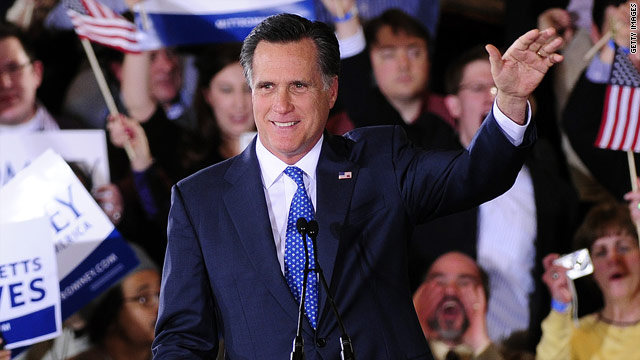 (CNN) – While some see no impending end to the GOP nomination battle, Mitt Romney reiterated Wednesday that he expects to capture his party's nomination, and does not foresee an open or contested convention.

"We've got the time and resources and a plan to get all the delegates. We think that will get done before the convention," Romney said in a CNBC interview. "One thing I can tell you for sure is there's not going to be a brokered convention where some new person comes in and becomes the nominee. It's going to be one of the four people that are still running."

Each of those four picked up some delegates from the ten contests on Tuesday, with the most – almost 200, by CNN's projection – going to Romney. The former Massachusetts governor won six contests, including a close win in the battleground of Ohio, his home state of Massachusetts, and Virginia, where only he and Ron Paul were on the ballot.

Romney said his organization has and will keep him competitive.

He has "a very strong lead in terms of the number of people who have actually voted for our campaign," Romney said. "We've organized a very effective team. I'm really proud of the folks across the country that have been making the calls, knocking on doors, turning out voters."

With the delegate count split, talk of a contested convention – where no single candidate has the 1,144 candidates needed to win the nomination – remains. In that scenario, a person not currently in the field could enter and win.

Sarah Palin, the party's 2008 vice presidential candidate who previously appeared to be considering a 2012 presidential bid, did not shoot down the idea of that person being her in an exclusive interview with CNN.

"Anything is possible. I don't close any doors that perhaps would be open out there, so, no, I wouldn't close that door," Palin said after casting her vote in Alaska's Republican caucuses. "My plan is to be at that convention."

With approximately one out of three delegates to the convention now decided, it would be an uphill battle for Rick Santorum, Newt Gingrich, or Ron Paul to become the nominee. Methods of allocating delegates proportionally to the actual vote has been one reason for a longer 2012 primary season than in 2008. That year, Sen. John McCain of Arizona had won the race by early March, though also due to frontloading, more contests had taken place by then.

Santorum, a former senator from Pennsylvania, is projected at second in the delegate count after winning the North Dakota caucuses and primaries in Oklahoma and Tennessee.

Gingrich, a former House speaker, on Tuesday won his home state by twenty points, giving him fuel to continue. Paul did not win any contests on Tuesday, but accumulated some delegates, and said in a CNN interview that the race is far from over.

"Nobody is going to clinch the election today," he said in an interview on CNN's "John King, USA" before Tuesday's results were known. "Sorting all this delegate selection process, I think we have a little bit of time left before you declare anybody a winner."

Although Romney is hundreds of delegates, and many contests from the nomination, he predicts the Republican party will coalesce behind the eventual winner.

"When we have a nominee, we will come together because Barack Obama has organized the conservative community, let's put it that way," Romney said in the Wednesday interview. "The community organizer has organized us in a big way."