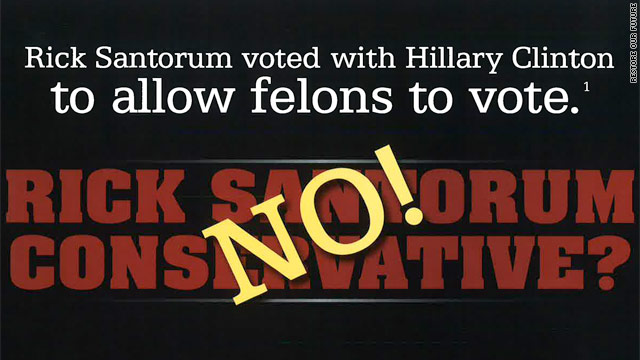 Atlanta (CNN) – With the recognition that Super Tuesday did not deliver a knock-out punch for Mitt Romney and that the Republican primary contest is expected to continue for the foreseeable future, the super PAC supporting Romney's bid has bought almost $1.4 million worth of ads in states that don't vote until the end of March.

With much of the political world's attention now focused on Alabama and Mississippi, which vote next week, the super PACs supporting Romney and Newt Gingrich are engaged in a multi-million dollar ad war in those two states.

Taking advantage of its major cash advantage, Restore Our Future has bought more than $2 million in Alabama and Mississippi in broadcast and cable time through the primaries, according to a Republican media consultant tracking buys. The group, which started airing commercials in both states two weeks ago, is running a combination of ads criticizing both Santorum and Gingrich and one touting Romney's help in saving the son of a former business associate. The PAC bought more than $1.3 million worth of ads slated to begin airing Wednesday through primary day.

Winning Our Future, which is supporting Gingrich, is also already on the air, having bought a total of $665,000 worth of broadcast, cable and radio commercials in both states, according to the GOP consultant.

The super PAC pushing Romney also is aiming its fire at Santorum in several mailers sent to Alabama voters.

In one obtained by CNN, the pro-Romney Restore Our Future attacks Rick Santorum for "Typical behavior from a real Washington insider."

The mailer reads: "Like Most D.C. insiders Rick Santorum has a problem. He puts his interests ahead of ours!" The flier specifically criticizes Santorum for voting for a bill allowing felons to vote. Santorum has said that vote was unfairly criticized because the bill required a person to finish all parole and probation before being allowed back on the voting rolls.

The other side of the pamphlet shows a sign saying "Vote here" with the word "felons" written above it and next to it. It states: "Rick Santorum voted with Hillary Clinton to allow felons to vote. Typical behavior from a real Washington insider."

A second flyer, also obtained by CNN and also sent to Alabama voters, contrasts the fiscal conservative credentials of Romney and Santorum. While painting the former Massachusetts governor as someone who has created thousands of jobs and eliminated a $3 billion deficit, the group goes after Santorum for voting to increase the federal debt ceiling and spending millions on pork barrel projects.

As CNN previously reported, Rick Santorum's campaign is expected to make a major purchase of ads in Alabama, Mississippi and Kansas, which holds its caucuses Saturday. So far the pro-Santorum super PAC Red, White and Blue Fund has not started advertising in Alabama and Mississippi.