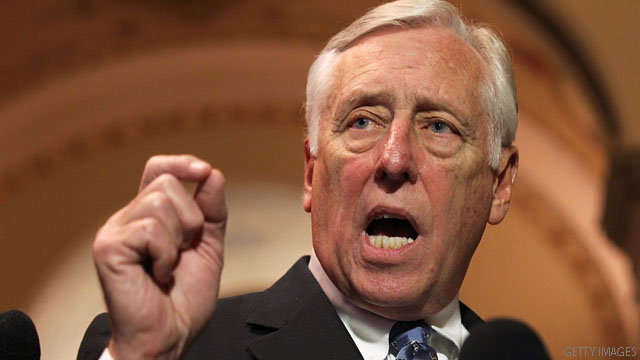 Washington (CNN) - The No. 2 House Democrat predicted Thursday that, if the economy continues to improve, Democrats will win control of the House of Representatives in November.

"I think our chances are reasonably good that we can take back the House, and if the economy continues to perform as it's been performing, I think we will take back the House," House Democratic Whip Steny Hoyer, D-Maryland, told reporters in his Capitol Hill office.

The Maryland Democrat argued that out of the 76 Congressional districts that House Democrats are focused on this November, "no less than 50 of these districts are really solid opportunities for us."

Democrats need to pick up 25 House seats to regain the majority in the House.

Hoyer cited a divided Republican Party - both in Congress and in the GOP 2012 presidential nominating process - as factors that position Democrats well in the fall election.

More than any other issue Hoyer said the economy will be what voters focus on in November, "If it's better we'll do better, if its worse it will affect us."

But the top-level House Democrat said his party learned a lesson from the last election when voters were unhappy they didn't focus enough on the issue and tossed them out of the majority. This time around he believes Democrats will be helped by the president being at the top of the ticket and traveling the country talking about his efforts to boost the recovery.

While Hoyer acknowledged that the backlash to the health care debate was a liability for Democrats in 2010, he argued that it will actually help the party this fall as seniors see lower drug prices, and younger Americans who aren't employed become eligible for health care coverage.

In addition, Hoyer said the tea party won't play the same role it did in the last election, when it helped elect GOP candidates. He cited his own race two years ago when he faced a tea party-backed candidate, who drew sizeable support because of his (Hoyer's) support of the health care bill. But after a couple of years of GOP control of the House that has seen fights over spending and few legislative accomplishments, the Democratic leader believes those activists may be less energized.

"The tea party is probably saying 'geez this isn't working,'" Hoyer said of Republican control in the House.

As the battle among Republicans for the presidential nomination continues to play out, the House Democratic Whip said the attacks on former Massachusetts Gov. Mitt Romney will help Democrats.