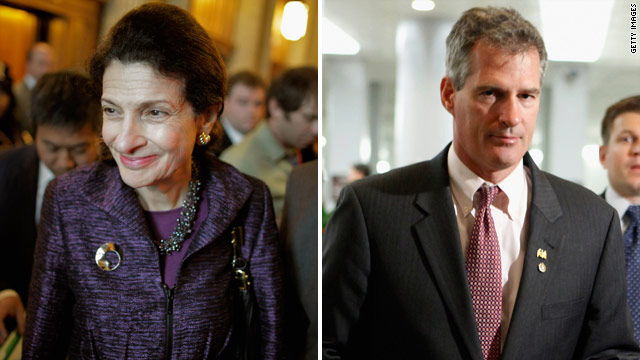 (CNN) – Outgoing Sen. Olympia Snowe gave her endorsement to another centrist Republican senator Thursday–one who's fighting to keep his seat.

Snowe endorsed Massachusetts Sen. Scott Brown in his effort to hold onto the seat he wrested from Democrats in a 2010 special election.

"During the last two years, I have worked closely with Scott and have come to appreciate his independent spirit and bipartisan outlook," Snowe said, according to a written statement.

Snowe announced her intention to retire after completing her third term in Congress last week.

Calling Brown a "much-needed breath of fresh air," Snowe again lamented the "gridlock and partisanship" of the Senate chamber-key frustrations she said led to her decision to depart.

"As I said when I announced my retirement, bipartisanship is an honorable pursuit, which is a belief that Scott Brown shares and demonstrates every day in the United States Senate," Snowe continued.

Now backed by Snowe, Brown is expected to face a tough re-election battle against his likely opponent, Democrat Elizabeth Warren.

According to a Suffolk University Poll released in February, Brown leads Warren who as an adviser to President Barack Obama helped launch the Consumer Financial Protection Bureau by nine percentage points statewide.

But Warren outraised Brown in the final fundraising quarter of 2011, bringing in $5.7 million compared to his own $3.2 million haul, according to FEC filings.

A 2012 win would allow Brown to serve his first full term in the Senate, cement his standing as the lone Republican that could take the seat after 45 years in Democratic hands during the late Sen. Ted Kennedy's tenure, and solidify public favor for moderates.

Snowe and Brown have both been recently targeted by tea party activists for their centrism ahead of 2012 elections.

"I'm extremely honored to have the support of Senator Snowe," Brown said in the joint statement. "She has served as an example to those of us who prefer bridge-building over rock throwing."

CNN's Ashley Killough and Gabriella Schwarz contributed to this report.