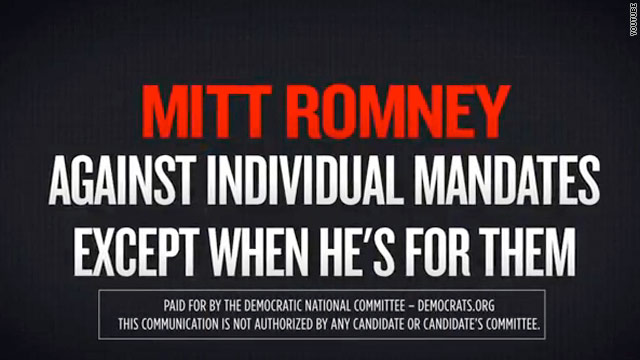 The video is the latest in a series of hits on Romney from the Democratic National Committee, which has focused almost exclusively on the former Massachusetts governor in the lead-up to November's general election fight against President Barack Obama.

Called "Say Anything," the video splices together clips of Romney explaining the health care plan which passed when he was governor of the Bay State, a measure that included an "individual mandate" requiring citizens to purchase health insurance coverage. The Affordable Care Act passed by a Democratic controlled Congress and signed into law by Obama in 2010 has a similar provision.

Romney, the front-runner in the race for GOP nomination, has been criticized by his Republican rivals for pushing the law in Massachusetts that required citizens to obtain insurance, saying the mandate restricts individuals' right to make their own health insurance decisions. Romney has responded that he never intended the Massachusetts law to be adopted nationwide.

In the DNC video released Friday, Democrats attempt to paint Romney as a flip-flopper on the issue, presenting him at various points saying he opposes a federal individual mandate, while using tape from older interviews that suggests he's changed his position.

"Mitt Romney condemns the individual mandate on the campaign trail. Is that the position he's always had?" the video asks.

Clips of Romney in 2011 and 2012 show the candidate saying he "opposed the idea of a federal mandate from the very beginning," and that he would never take "what we had done for one state and impose it on the entire nation."

Earlier clips of Romney portray a different picture, as when he said the Massachusetts law "could be a model for the nation."

He is shown in a 2008 GOP presidential debate saying "I like mandates. If somebody can afford insurance and decides not to buy and then they get sick, they ought to pay their own way, as opposed to expect government to pay their way. That's an American principle."

The video ends with the proclamation: "Mitt Romney against individual mandates except when he's for them."

DNC Chairwoman Rep. Debbie Wasserman Schultz said in a statement: "Mitt Romney will say anything to get elected. Throughout this primary campaign, Romney has tried to rewrite history about his health care record, telling conservative audiences that he never supported an individual mandate at the national level, only at the state level. Unfortunately, he can’t run from the truth – Mitt Romney has repeatedly expressed support for a national individual health care mandate, based on the model he established in Massachusetts."

Responding to the DNC, Mitt Romney spokesperson Andrea Saul said Democrats were attempting to distract from Obama's own record.

“President Obama and his allies are desperate to distract from his failed record, so they are continuing their strategy to ‘kill Romney,'" Saul said. "If they spent half as much time trying to create jobs as they do spreading falsehoods about Mitt Romney, there might be fewer than 23 million Americans struggling for work. Obamacare is bad policy, it’s bad law and Mitt Romney will repeal it. On health care, what’s important is that states retain the ability to pursue their own solutions, not have one imposed on them by Washington.”