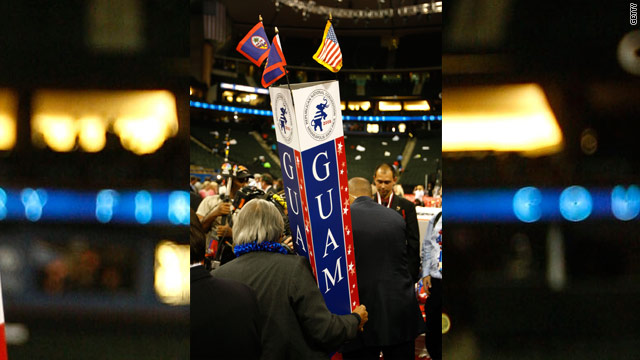 (CNN) – The Pacific island of Guam is nearly 8,000 miles from Mitt Romney's campaign headquarters in Boston, but in the scrap for 2012 delegates no distance seems too far.

On Thursday, Romney's campaign announced they were sending the candidate's son Matt to Guam and Saipan, in the Northern Mariana Islands, where Republicans will hold caucuses on Saturday.

And on Friday the campaign touted the endorsement of Guam Gov. Eddie Baza Calvo, who told Pacific Daily News Romney "understands" the impact federal regulations have on isolated islands like his.

Guam and the Northern Marianas are United States territories, which award delegates in the nominating process along with Puerto Rico, the U.S. Virgin Islands and American Samoa. The largest prize of the U.S. territories comes in Puerto Rico, which has 23 total delegates, and votes on March 18.

Guam carries nine delegates, a drop in the bucket for candidates looking to reach the 1,144 number a candidate needs to clinch the GOP nomination. But in tight contests, every delegate contributes to a potential nomination. In 2008, then-candidate Barack Obama beat Hillary Clinton by just seven votes, 2,265 to 2,257 on the Pacific Island.

The two Democratic presidential hopefuls inundated the island with radio and television advertisements, each promising long-awaited political gains: the ability for Guamanians to be able to vote for president, lifting the territory's cap on Medicaid and, perhaps the most coveted prize of all, war reparations in the form of more than $120 million.

In 2012 no GOP candidate has purchased air time in Guam, though the candidates have not ignored the 212 square mile island, which has a population of just under 176,000.

Aside from the visit from Romney's son, the island's GOP leaders were treated to a telephone call from Rick Santorum, according to Pacific Daily News. The candidate made his case for the Republicans' votes, but also apologized for joking in January that he would banish certain federal judges to the island as punishment.

A Guam senator said the apology was "very sincere," according to the paper.

Another U.S. territory voting Saturday – the U.S. Virgin islands – will send nine delegates to the Republican convention. Herb Schoenbohm, the GOP chairman for the Virgin Islands, said Friday Republicans on the islands would caucus from noon to about 6 p.m. local time.

Schoenbohm said Republicans in the U.S. Virgin Islands are showing strong interest in the presidential race because the territory is plagued with high unemployment and gas prices approaching $5 a gallon.

Because residents of the Virgin Islands can't vote in the general election, Schoenbohm said "we have a voice at the convention. We can help decide who the nominee is. It's our only chance."

While territories are allowed to vote in primaries and caucuses to send delegates to party conventions, they have no electoral votes to select the president in the general election.