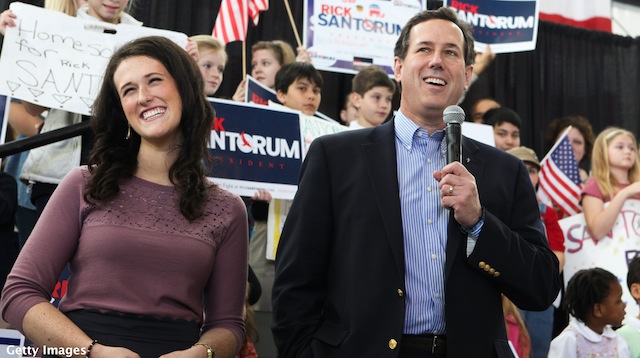 The candidate's eldest child, Elizabeth, 20, will go to Hawaii to stump for her dad ahead of the state's caucuses next week, Santorum announced Saturday.

In the fight for the Republican presidential nomination, the campaign's decision further underlines that every delegate counts, even those located half an ocean away.

With 17 delegates at stake, Hawaii holds open caucuses, meaning any registered voter in the state can participate. Voters will caucus on Tuesday.

The former Pennsylvania senator broke the news about his daughter while standing on stage at a campaign rally in Missouri with his wife, Karen, and second-oldest child, John.

"John just said to me there is an advantage of being the oldest," Santorum joked.

Elizabeth Santorum, who has become a top surrogate for her father, isn't the first child of a candidate to be sent to distant lands this election cycle.

On Thursday, Mitt Romney's campaign announced they were sending the candidate's son Matt to Guam and the Northern Mariana Islands, both of which held their caucuses Saturday.