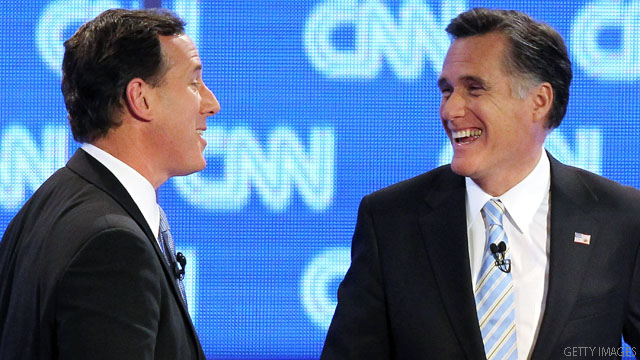 (CNN) – It's a close race in Illinois between Mitt Romney and Rick Santorum, according to a new poll ahead of the state's March 20 primary.

However, 46% of those surveyed said they could change their minds before Election Day, when 54 delegates are at stake.

Voters in the Land of Lincoln State will choose after primaries Tuesday in Alabama and Mississippi and caucuses on March 17 in Missouri.

The Illinois poll, taken before Santorum won the Kansas caucuses Saturday, indicated Romney with the edge in Chicago suburbs and Santorum with more support in counties outside the state's most populous city.

Santorum led Romney among very conservative voters in the state, 42% to 29%, while Romney beat Santorum among moderate Republicans, 39% to 17%. The 40% of voters who considered themselves fairly conservative were statistically split – with Romney receiving 36% to 32% for Santorum, a gap within the sampling error.

In addition, Santorum prevailed among those who described themselves as born-again or evangelical Christians, and topped Romney among voters earning less than $100,000 annually, although the results also fell within the sampling error.

Romney led among those who do not consider themselves born-again or evangelical Christians, voters 50 years of age or older, suburban women and those with incomes over $100,000 a year.

Sen. John McCain captured the state during the 2008 GOP presidential primary with 47% of the vote to Romney's 29%. Then-candidate Mike Huckabee picked up 16% and Paul received 5%.

The Chicago Tribune and WGN-TV surveyed 600 registered Republicans between March 7 and March 9 with a sampling error of plus or minus four percentage points.