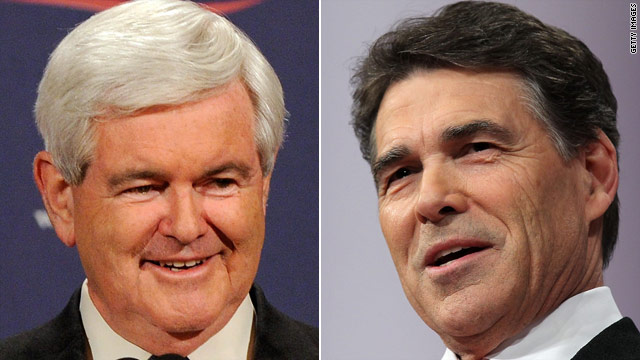 Atlanta (CNN) - Aides to Newt Gingrich and Rick Perry are downplaying a report the Gingrich campaign is contemplating offering the Texas Governor the number two slot on a presidential ticket.

"Of course we think very highly of Gov. Perry and appreciate very much his generous support, but this is not a topic the two principals have discussed," Kevin Kellems, a senior adviser to the Gingrich campaign, told CNN.

"Gov. Perry thinks Newt Gingrich is the strongest conservative to debate and defeat President Obama and truly overhaul Washington. The speculation is humbling but premature," a spokesman for Perry told CNN.

Asked if representatives of Perry and Gingrich have talked about this possibility, Kellems responded "Impossible to answer because it is not feasible to track with confidence the individual, private communications of that many people in two camps spread across North America."

Fox News, which first reported the story Sunday, said some in the Gingrich campaign were having "preliminary 'what-if' conversations are underway that could lead to a Gingrich-Perry ticket being announced" prior to the Republican Convention.

Perry, who endorsed Gingrich when he left the nomination race in January, told CNN's Wolf Blitzer in December before leaving the race when asked about whether he was interested in a vice presidential slot said: "Why would you leave being governor of the state of Texas to be vice president?"

When Mitt Romney was asked about the possibility of a Gingrich-Perry ticket, he told Fox News in an interview Monday "I'd be surprised if anyone is talking to anyone about being a running mate at this stage." Romney added "I hope I get that opportunity" to choose a running mate down the road if gets the Republican nomination.