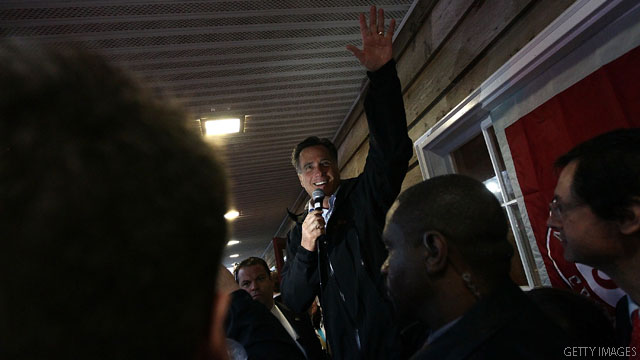 Poll: Romney moves up in Mississippi

(CNN) – Mitt Romney experienced a bump in the most recent poll of Republican voters in Mississippi, where ballots will be cast Tuesday.

The American Research Group survey released Monday showed Romney edged out Newt Gingrich, 34% to 32%, followed by Rick Santorum at 22% and Ron Paul at 8%. Romney's advantage is well within the poll's sampling error.

Gingrich, a Georgia native, has largely staked his presidential intentions on strong showings in the neighboring states of Mississippi and Alabama, which vote on Tuesday.

In the Mississippi poll, self-described supporters of the tea party movement backed Gingrich with 38% support, followed by Romney with 23%, Santorum with 21% and Paul with 8%. Romney was ahead, at 46% support, among those who said they do not support or are undecided about the grassroots movement. Santorum followed with 23% to Gingrich's 16% and Paul's 9%.

The "anti-Romney" vote constituted 54% of the vote, while Gingrich gave up a share of that group to Santorum.

"If Gingrich and Santorum continue to split the anti-Romney vote, Romney will win," a press release from ARG's Dick Bennett said.

ARG surveyed 600 likely Republican primary voters between March 10 and March 11 with a sampling error of plus or minus four percentage points.