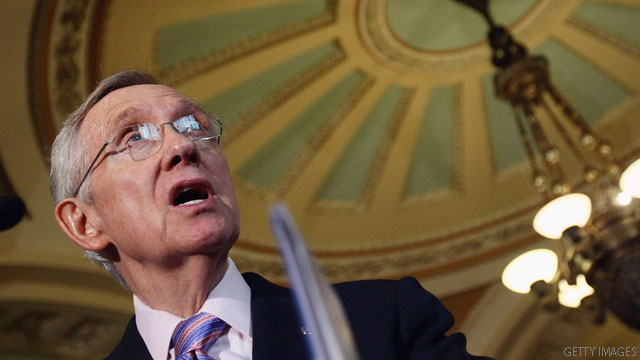 Democrats hope the unusual and high profile series of votes will pressure Republicans to clear the judges. If they don't, Democrats say it will reinforce their contention that Republicans are responsible for the congressional dysfunction and gridlock that surveys show voters abhor.

"We should have up or down votes," Reid said in a speech on the Senate floor. "These kind of qualified, consensus nominees that in years' past would have been confirmed in days or weeks now languish for months and months with no action. There are judges on this list who go back to November of last year."

The Nevada Democrat displayed a chart showing it takes five times as long to get an Obama pick confirmed than it took when Republican George W. Bush was president. The inaction, he said, is leading to backlogs in many courts.

Sen. Jeff Sessions, R-Alabama, a veteran member of the Judiciary Committee, acknowledged the confirmation process is taking longer but denied Republicans are mounting filibusters against the judges.

"This is just the normal flow of the confirmation process. There were 60 or 70 judges confirmed last year. Five have already been confirmed this year. Many more will be confirmed in the normal process," Sessions told CNN. "All it is, is they haven't been given unanimous consent to bring up for an immediate vote. I think it's fine the judges lay out there. The people have a chance to know who they are in their home states and if they've got problems sometimes they're raised. But I think this is an overreach. I think are members are pretty offended actually."

The 17 votes are expected to come one after the other Wednesday. The whole process could take most of the day.

Leadership aides in both parties declined to predict if Reid's gambit would result in the confirmation of any of the judges, as he would have to pick up several Republican votes to get the 60 votes needed to succeed.

But Sessions didn't think it would work.

"I don't speak for everyone but I think this is more of a political gimmick to try to create a narrative of obstruction here but I don't' think the Republicans are going to knuckle under to that," he said.