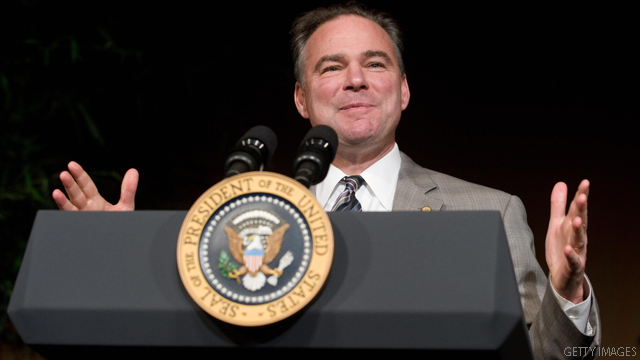 (CNN) - Following the creation of a new super PAC supporting Republican George Allen's Senate bid in Virginia, Democratic opponent Tim Kaine sent a letter to Allen Tuesday urging that anyone or any group spending money on the race do so openly.

"Virginia voters are entitled to know who is funding this campaign," the letter stated. "Contributions directly to either of us are already disclosed. But, the third parties filling the airways get to hide behind a cloak of secrecy."

The letter points to a December debate in which the candidates-both former governors of the state–agreed they admired Virginia's "sunlight" approach to campaign finance. According to state law, any individual or corporation can donate unlimited amounts of money to a campaign or PAC, as long as those contributions are disclosed (and amount to more than $100).

However, donors must comply to federal laws when contributing to a federal campaign, including U.S. Senate campaigns. And with a super PAC now involved, where donors are permitted to make un-disclosed contributions, Kaine's team is concerned with what they see as an unfolding lack of transparency in the race.

"Let's adopt a simple rule: No Secret Money," Kaine wrote in the letter.

Kaine's campaign did not spell out guidelines on how the campaigns would actually hold outside groups accountable to full disclosure practices, especially given that campaigns are legally prohibited from coordinating with super PACs.

The proposal echoes similar sentiments from the Massachusetts Senate race, where both candidates have pledged to self-impose a penalty and donate money from their own campaigns to charity if an outside group spends money on the race.

On Monday, the Kaine campaign sent out a release attempting to fundraise off the formation of the new super PAC dedicated to helping Allen reclaim the Senate seat he lost in 2006. Paul Bennecke, former political director of the Republican Governors Association, will lead the PAC.

Allen's campaign responded with its own letter Tuesday afternoon, dismissing Kaine's proposal as a "gimmick" and pinning the candidate for accepting union contributions.

"It's difficult for voters to take talk of transparency seriously when it comes from a campaign that is substantially funded by big union bosses and their organizations. In fact, most will see it as an unfortunate gimmick, typical of the partisan gamesmanship playing out in Washington today," Allen said in the letter.

Allen went further and called on Kaine to disavow what he called a "compulsory union donation system."

"This will perhaps give you more credibility when speaking about transparency in donations," he said.

"The very definition of a 'Washington political gimmick' is saying one thing and then doing another. George Allen told Virginia voters that he has 'always been an advocate of disclosure and freedom,' but today he showed he is unwilling to back up his words with action," Hoffine said, adding that the campaign hopes Allen will reconsider.