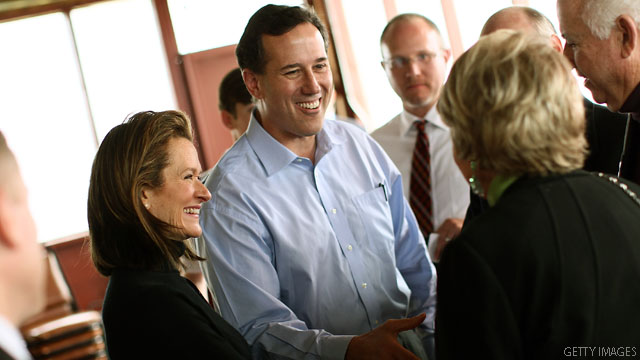 Atlanta (CNN) – With the nation's attention turning to rising gas prices, the super PAC supporting Rick Santorum is now trying to tap into that concern.

The Red, White and Blue Fund bought $260,000 of television time to air an ad in Louisiana beginning Wednesday that focuses on the country's dependence on oil from overseas and how Santorum can help lead on the issue.

Santorum's campaign and the candidate's allies see an opportunity in Louisiana, which holds its primary on March 24, because of its conservative roots. Santorum will hold his election night party next Tuesday in Lafayette, Louisiana.

A new poll from WWL television showed Santorum leading the race among likely Republican voters in Louisiana. The survey indicated he received just over 25% support, while Mitt Romney came in second with just under 21%. Newt Gingrich followed with almost 20% and Ron Paul had less than 6%. The poll showed more than a quarter of GOP voters are still undecided.

"We are confident tonight will be a good night, and we are now looking at other states to add to our momentum," Stuart Roy, an adviser to the super PAC, said in a statement. "President Obama's energy policies have been a disaster, but Rick Santorum has an energy plan to not only bring down the price at the pump but also to create the jobs we need at home."

Until now the only entity with television ads in Louisiana was Restore Our Future, the super PAC promoting Romney. It has purchased about $450,000 worth of commercial time in the state so far.

Santorum, the former Pennsylvania senator, has said he would remove bans on onshore and offshore drilling, promote private sector drilling for natural gas and eliminate energy subsidies and tax credits, steps he says will promote more energy production. He would also immediately approve the proposed Keystone XL oil pipeline, which the Obama administration has opposed.

Gingrich has recently focused much of his campaign on the energy issue, vowing to bring gas prices down to $2.50 a gallon if he is elected. The former House speaker has modest ad buys in Alabama and Mississippi pushing the theme.

Romney has said the president should open more domestic sites for drilling as one way to alleviate dependence on foreign oil, and to do more to promote natural gas reserves in the country.

Recent polls show many Americans are worried about gas prices. In an ABC News/Washington Post survey taken between March 7 and March 10, 89% of registered voters said they were either very or somewhat concerned about the recent spike. In the same poll 63% said the increase has caused financial hardship for the family.

Asked if there's anything the Obama administration could do to reduce gas prices, 50% said yes while 45% said it was beyond its control. A recent CBS/New York Times poll, conducted between March 7 and March 11, showed 54% of Americans think a president can do a lot to control the prices, while 36% said it was beyond a president's control. The president's overall approval numbers, as well as his numbers on the handling of the economy, have decreased in the past month as the country has seen the rise at the pump.