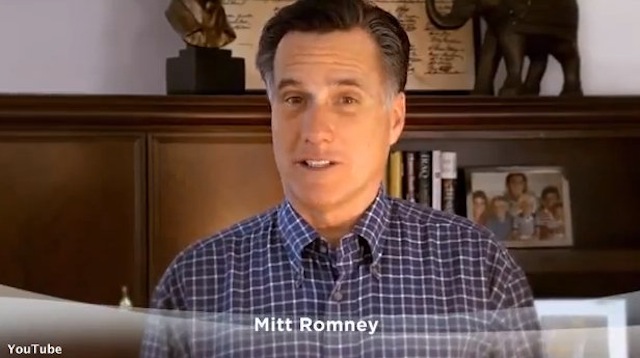 (CNN) - Republican presidential candidate Mitt Romney stars in a new TV ad for Sen. Orrin Hatch of Utah, who's battling to keep his seat for a seventh term.

In the 30-second commercial, Romney urges viewer to turn out for the senator in the state's GOP neighborhood caucuses on Thursday.

"This is Mitt Romney. We need strong leadership in Congress to fix the economy, and we can count on Sen. Orrin Hatch in the fight to lower taxes, to balance the budget and repeal the federal government takeover of healthcare," Romney said in the ad.

The ad buy, which totals more than half a million dollars, began airing statewide over the weekend, according to the campaign. It follows a series of radio ads also recorded by the former Massachusetts governor.

FreedomWorks, a grassroots conservative organization, has also targeted Hatch, spending hundreds of thousands to help oust the 35-year Senate veteran. The same group was successful in leading to the defeat of Utah Sen. Bob Bennett at the state's GOP convention in 2010, paving the way for tea party favorite Mike Lee to eventually win the seat.

Hatch opponents are hoping for a similar scenario this year. During Thursday's neighborhood caucuses, voters will elect delegates to send to the state convention, which ultimately selects the Republican nominee for the Senate.