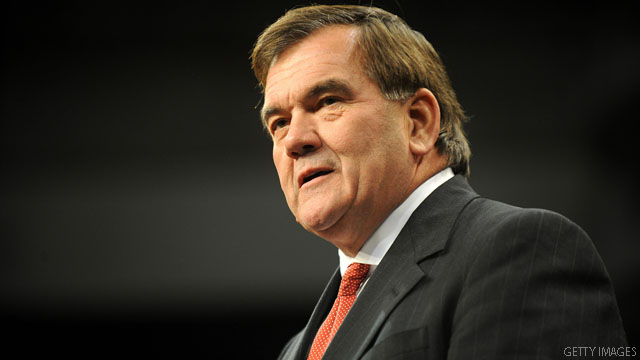 "I've met accomplished and strong leaders in my life," Ridge said in a statement released by Romney's campaign. "Mitt Romney is one of them."

Prior to serving in the George W. Bush administration as the first to head the Homeland Security Department, Ridge held two terms as Pennsylvania governor and six terms as a congressman for the state.

Ridge, who's known as a pro-abortion rights Republican, endorsed Huntsman early on in the race, but the candidate ended his presidential bid shortly after a disappointing finish in the New Hampshire primary in January. Huntsman quickly threw his support behind Romney.

In his endorsement Wednesday, Ridge praised Romney for his "record of accomplishment in the private sector" and pointed to his role in running the 2002 Winter Olympics in Salt Lake City.

"Given the economic problems that America faces, including Pennsylvania, where high unemployment continues to cause such hardship, his experience turning around failing enterprises makes him precisely what the country needs," Ridge said.

While Pennsylvania does not hold its primary until April 24, the state may still be in play by then with 72 delegates at stake. It's also the home state of Romney's rival Rick Santorum, who is currently leading in polls in the Keystone State.

Ridge's endorsement came one day after Romney placed third in two big southern primaries in Mississippi and Alabama. Romney, however, won Tuesday's contests in Hawaii and American Samoa and made a total gain of 31 delegates, bringing him to 489, according to CNN's latest estimate.

Romney focused on Obama and gas prices, not competitors