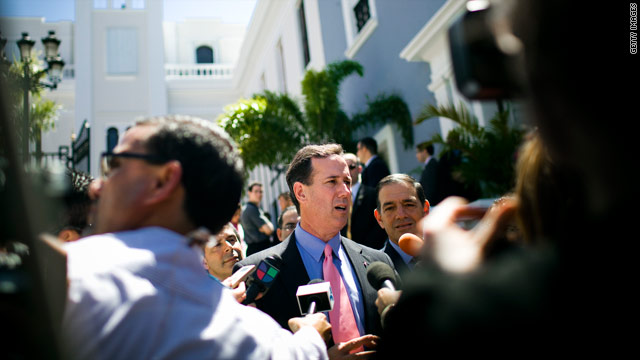 (CNN) – Rick Santorum on Wednesday laid out one caveat he would hold for the U.S. territory of Puerto Rico before it obtained statehood, saying the island would need to make English its principal language before it becomes a state.

Speaking with the Puerto Rico newspaper Vocero, Santorum was asked if he would support statehood for an island where the primary language is Spanish.

Article IV, Section 3 of the U.S. Constitution spells out how states can be admitted to the union, making no mention of language requirements. The passage states: "New States may be admitted by the Congress into this Union; but no new State shall be formed or erected within the Jurisdiction of any other State; nor any State be formed by the Junction of two or more States, or Parts of States, without the Consent of the Legislatures of the States concerned as well as of the Congress."

A second clause states Congress has the power to "dispose of and make all needful Rules and Regulations respecting the Territory or other Property belonging to the United States."

In the past, Congress has passed "enabling acts" for territories seeking statehood, and has included provisions requiring English to be the prevailing language as a requirement for admission. The Louisiana Enabling Act of 1811 mandated the new state conduct its official business in the same language as the United States.

In 1906, Congress passed an enabling act requiring Oklahoma use English in its public schools before it obtained statehood.

There is currently no law declaring an official language of the United States, though several attempts have been made to give English that designation. Thirty-one states have passed laws naming English as their official language.

Both English and Spanish are official languages of Puerto Rico, though Spanish is by far the dominant language on the island. According to census data released in 2012, 81% of Puerto Rico residents spoke English "less than very well," with 95% saying Spanish was the language they spoke at home.

Congress would need to approve statehood for Puerto Rico after residents voted in a referendum. Many members of Congress, some of whom have pushed for a federal law declaring English as the official language of the United States, would no doubt raise the island's language as an issue before voting for statehood.

Santorum was campaigning in Puerto Rico Wednesday ahead of the territory's GOP primary on Sunday. There are 20 total delegates at stake.