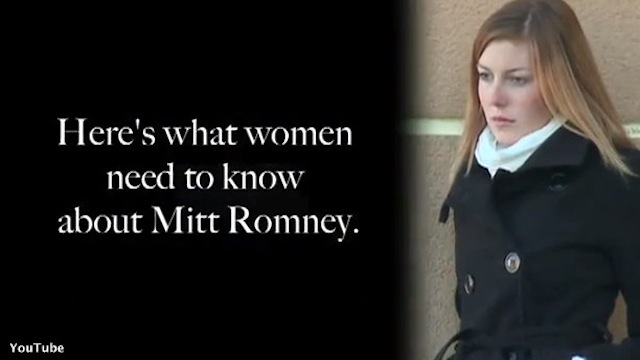 (CNN) - In its latest web video against Mitt Romney, the Democratic National Committee piled on criticism Friday over the candidate's position on several key women's issues.

The release of the video coincides with Romney's appearance in Illinois Friday morning, just days ahead of the state's Republican presidential primary next week.

"Mitt Romney is coming to Illinois and looking for support from women," the video's narrator says. "But here's what women need to know about Mitt Romney."

The video seizes on a comment Romney made earlier in the week, in which he said in an interview that he would 'get rid of" of Planned Parenthood.

Speaking on CNN Tuesday night, Romney adviser Eric Fehrnstrom said the candidate would not eliminate the organization but would cut federal funds that support it.

"They have other sources of funding besides government operations, but in order to achieve balance, we have to make some tough decisions about spending," Fehrnstrom said.

The spot also attacks the former Massachusetts governor over his anti-abortion stance and claims the candidate supports policies that would "ban many forms of birth control," but the video does not specify which forms.

The video represents the latest move in a campaign by top Democrats and Democratic groups seeking to paint the Republican Party as "anti-women" over the fiery debate surrounding contraception coverage.

Romney, however, has typically polled well among women, compared to his Republican presidential rivals. While the former Massachusetts governor now opposes abortion, he once supported the right to choose when he ran for governor of the Bay State-a change in tune he openly admits.

No stranger to DNC attacks, Romney's campaign has repeatedly responded to the group's videos, arguing Democrats were attempting to distract from President Barack Obama's own record.

“President Obama and his political machine will try to make this election about anything besides his failures on the economy. Jobs and the economy are the most important issues to all voters – men and women alike – but President Obama knows he can’t run on his abysmal economic record, especially against an opponent who has spent his life in the real world economy and has actually created jobs,” Romney spokeswoman Andrea Saul said in a statement on Friday.