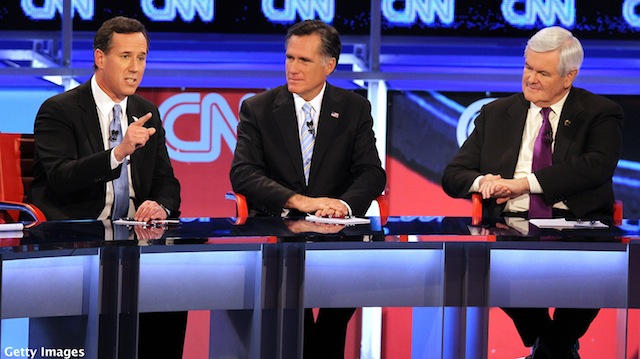 Poll: Gingrich supporters would split between…

(CNN) - The question has been circling for days: If Newt Gingrich were to drop out of the race, who would get his supporters?

A new poll released Friday indicates that his base would split its vote evenly between Mitt Romney and Rick Santorum, the top two frontrunners vying for the Republican presidential nomination.

Twelve percent said they would go for Paul, while 10% gave no opinion.

Following Gingrich's losses this week in Alabama and Mississippi–two primaries Gingrich had focused on winning–speculation has swirled among political insiders as to how much longer he could remain a viable candidate in the race.

Santorum supporters have argued that an end to Gingrich's campaign would give a significant boost to the former Pennsylvania senator, as they both paint themselves as the "true" conservatives in the race.

Last week Stuart Roy, an adviser to a pro-Santorum super PAC, called on Gingrich to drop out, saying, "With Gingrich exiting the race it would be a true head-to-head race and conservatives would be able to make a choice between a consistent conservative in Rick Santorum or Mitt Romney."

But as late as Friday morning, Gingrich has continued to maintain he'll stay in the race as long as possible, even if that means taking his delegates to a brokered convention in August.

Gallup also analyzed what the race would look like today if Gingrich were no longer in the running. In that case, Romney would take 40% among registered Republicans and GOP-leaning independents nationwide, up six points from 34% with Gingrich still in the race.

Santorum, however, would see more mild gains, gaining five points from 28% to 33%, while Paul would only pick up two points from 11% to 13%.

For the survey measuring only Gingrich supporters, Gallup interviewed 290 of his backers by telephone from March 8 to March 15, partly before and partly after Tuesday's primaries. The poll has a sampling error of plus or minus seven percentage points.

As for the poll questioning Republican voters overall, Gallup surveyed 1,947 registered voters by telephone during the same time period. The sampling error was plus or minus three percentage point.