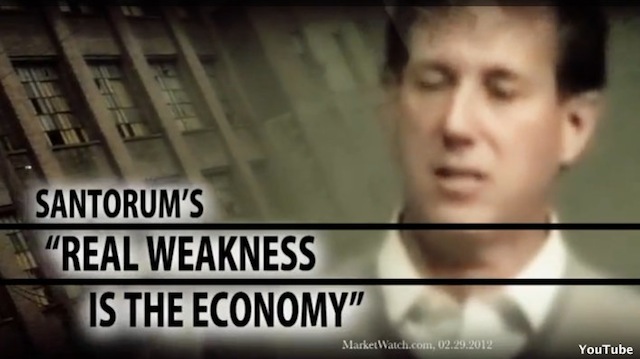 "Who can turn around the economy and defeat Barack Obama? Not Rick Santorum," the ad's narrator says.

Romney has repeatedly used the 'lightweight' term to describe Santorum, as well as President Barack Obama, on the campaign trail.

Switching gears, the ad then highlights Romney's plan, quoting an American Enterprise Institute analysis that describes his policies as "the boldest GOP agenda since Reagan."

The narrator continues: "Mitt Romney: ready to lead the nation to a new era."

With 54 delegates at stake in the Illinois primary on Tuesday, the state has already become prime battleground for the candidates.

Team Romney's ad buys in Illinois totaled $939,000 as of Thursday, while the super PAC supporting Romney, Restore Our Future, had purchased $2.5 million in air time.

Meanwhile, the Santorum campaign and its super PAC–Red, White and Blue Fund–had spent more than $430,000 combined on Illinois ads.