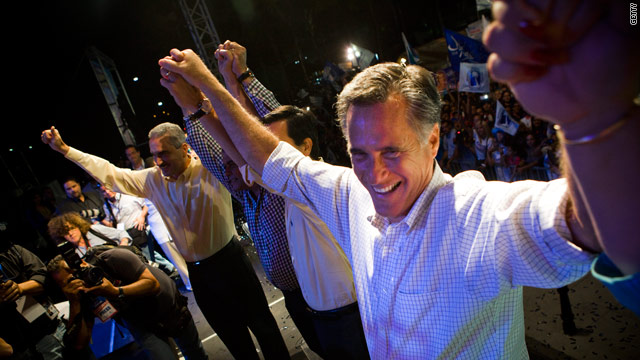 His day-long trip to the U.S. territory took the candidate to a boisterous political rally and shopping for tropical fruit at a local market.

Asked by a reporter about his chances in Sunday’s primary, Romney cited the Friday evening rally - which most closely resembled a rock concert - saying it "couldn't have been more fun and more encouraging" and made him "cautiously optimistic that we’re going to do well in Puerto Rico."

The rally, held in Old San Juan, featured hours of upbeat music and dancing (including energetic on-stage shimmying by a raft of local politicians) and built up to Romney's keynote speech.

On a tour through a local market the next morning, Romney and his wife, Ann, examined avocados and papayas.

The former Massachusetts governor marveled at a local system that prints lottery numbers on receipts to encourage store owners to report sales.

Romney explained the system ensured "they'd have greater compliance and therefore didn't have to raise the tax rate."

Meanwhile, Romney was overheard playfully reminding his wife she had not yet given him a gift. Earlier this week Romney said a kiss from Ann was his best, and only, birthday present.

The White House hopeful heads next to Illinois, where he added campaign events Friday and Saturday. The midwestern state would be a key win for the former governor, who is locked in a battle with his chief rival, former Sen. Rick Santorum, for the Republican presidential nomination.

Romney told reporters he hoped to do well in Illinois, which votes Tuesday.

"I’m going to be there this afternoon so we’ll see," he said.