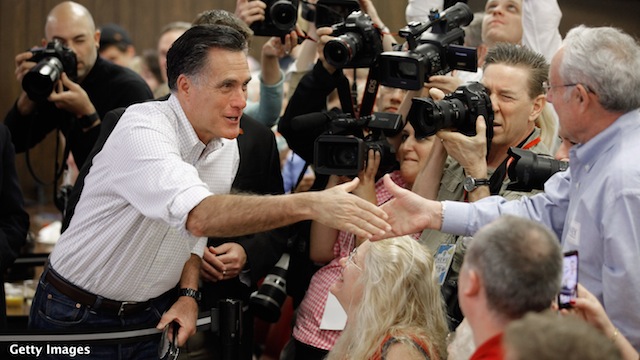 Moline, Illinois (CNN) - Mitt Romney made a pitch to struggling Illinois voters this weekend that he was the "economic heavyweight" who could turn around the economy if elected president in November.

"You've got moms that are driving their kids to school and practice after school and other appointments and wonder how they can afford putting gasoline in the car, at the same time putting food on the table night after night," Romney said. "The American people are struggling."

Romney accused Obama of learning about the economy "probably by debating it in subcommittees here in Illinois and subcommittees back in Washington, D.C." and again called for the ouster of three top Obama officials for failing to hold down gas prices.

In previous speeches in his campaign for the Republican presidential nomination, Romney has said expanding domestic oil production could help lower prices in the long-term.

Repeatedly referring to himself as "an economic heavyweight," Romney said his rivals – including Obama as well as fellow Republican contender Rick Santorum, a former Pennsylvania senator – just couldn't stack up.

Romney criticized Santorum as the race for Illinois' delegates shifted into high gear. Voters in the Land of Lincoln head to the polls on Tuesday in the latest battle between the leading Republican contenders.

Over the next two days, Romney will criss-cross the state, with events in Rockford, Vernon Hills, Springfield, Chicago and Peoria.